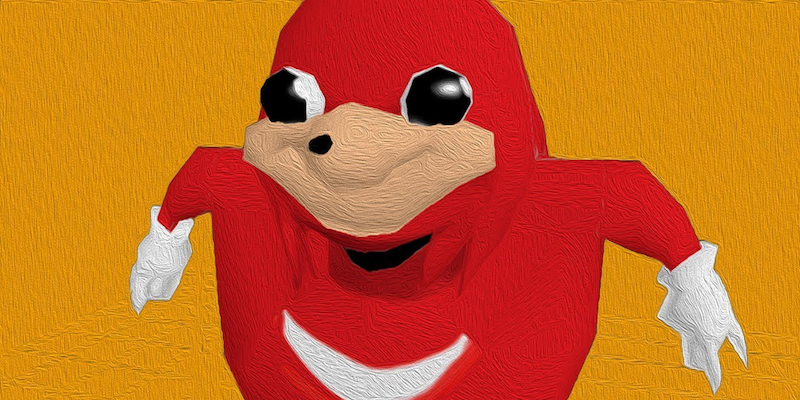 How Ugandan Knuckles turned VRChat into a total trollfest

VRChat is the latest front in the online culture wars.

VRChat is a platform for “creating and sharing virtual worlds”—sort of a virtual reality version of Second Life or The Palace. But what it’s really for, at least this month, is a racist caricature called Ugandan Knuckles. He’s a cute, deformed version of Knuckles the Echidna from the Sonic the Hedgehog franchise with a heavy “African” accent, and swarms of trolls are playing as him on VRChat.

Ugandan Knuckles is a throwback to the early days of the anarchic messageboard 4chan, whose anonymous users gleefully raided multiplayer kids’ games. On the 8-bit children’s game Habbo Hotel, they made Black avatars with giant afro haircuts, and barricaded the hotel swimming pool. “Pool’s closed,” went the meme. On Club Penguin, they formed a gang of purple penguins that was racist against “inferior” non-purples. These stunts express a certain tribalism and community spirit, but—like much of what happens on 4chan—that tribalism manifests as racist jokes.

That’s pretty much what’s happening with Ugandan Knuckles. Players with Knuckles avatars are running around “spitting” on other players who do not “know de way.” They’re putting on an exaggerated “Ugandan” accent, saying “bwah bwah bwah” and “ni**a,” and … clucking a lot, for some reason. It’s total anarchy, and a lot of people in the meme community love it—in spite of (or perhaps because of) how offensive it is.

What is Ugandan Knuckles?

The warped Knuckles character originated in this Sonic: the Lost World game review by YouTuber Gregzilla.

And it picked up its “Ugandan” flavor from fans of the Twitch streamer Forsen, who plays popular shooting game Playerunknown’s Battlegrounds (PUBG):

They take their quotes (including “de way”) from Who Killed Captain Alex?, a 2010 movie produced on a shoestring budget by Ugandan studio Wakaliwood. It became a minor meme around the time of its release, but it seems to have been revived by the PUBG players and the Ugandan Knuckles meme.

The studio, for its part, seems to be loving it. They’ve retweeted countless Ugandan Knuckles memes, and posted this one:

Here are a couple of VRChat players who claim to have created the “Ugandan” character for the mini-Knuckles avatar. It’s unclear whether they’re really the “originals,” but it’s as close to an origin story for Ugandan Knuckles as we’re going to get. You’ll notice they reference something called “Trap-Chan.” That’s Trap-Chan’s Avatar Mall, an area in VRChat where users can adopt a bunch of different avatars, including Knuckles.

Not everyone is on board with VRChat becoming a racist meme swamp, though. The creator of the original Knuckles VRChat model, Tidiestflyer, has posted a message asking players not to abuse his creation because he likes it and doesn’t want to see it banned or worse.

“With 500 people trying to just enjoy an event, they cant because there just isnt enough moderation to hold down the rampant amounts of memers. So please…. Think about the users that you’re playing with. Before they are all gone… Don’t let it be a second Second Life,” he wrote.

VRChat is fairly new, and it might have trouble appealing to new users if the only players they run into are Knuckles griefers. Memers are certainly early adopters of internet spaces, and they’ve shown they can set the tone in places like 4chan, Reddit, and YouTube. VRChat could be another such space, but Tidiestflyer would rather see it become a place for creative expression, not just for one meme.

On Twitter, there’s a debate flaring up between those who think a mostly white bunch of dudes running around VRChat shouting in Ugandan accents is racist, and those who think it’s OK because they’re quoting a movie whose creators seem to find it funny. This tweet has gotten quite popular over the past couple of days:

The comments are mostly from defensive gamers who love that Ugandan Knuckles has “triggered” some “leftists”:

jesus christ, i hope i dont regret this, but can someone explain to me how quoting a movie in a joking manner is racist?

Meanwhile, Gregzilla has started to sell shirts with his original Knuckles drawing on them, capitalizing on the meme’s sudden popularity, and he’s found himself caught in the middle of the argument. As with many other memes in the age of Trump, most notably Pepe the Frog, which was co-opted by the alt-right, this small, deformed echidna is being asked to do a lot more rhetorical work than a meme can actually manage.

And just to clear the air, my goal was to just sell a shirt with my Knuckles drawing on it. I didn't think much of any racist connotations. The VRChat meme itself (which I had nothing to do with other than the character design) is apparently mostly quoting a movie.

I wouldn't have agreed to sell it if I thought the meme was legitimately trying to hurt people, and I don't. It's mostly just a craze of people who play a game and put on an accent without any goals other than being goofy.

The road to hell is paved with memes

When 4chan carried out its “raids” in the mid-aughts, they were about teenage transgression. The messageboard had yet to be infiltrated by organized white supremacists, and experimenting with racism and trolling children’s online games was about seeing what they could get away with. In 2018, when 4chan’s Trumpian politics board, /pol/, has replaced the freewheeling /b/ as the site’s most important board, the same type of stunts has very different connotations.

Ugandan Knuckles is adolescent chicanery, for sure, but its supporters are also turning it into an argument in favor of some pet alt-right causes: “triggering the libs,” resistance to “PC” culture, and the freedom to enjoy racist humor without being criticized. Ironically, they’re doing this while arguing that it’s just a meme and shouldn’t be taken seriously. That’s a pretty tough needle to thread.

It’s been more than a decade since “Pool’s Closed,” and the internet hasn’t really grown up. It’s just found new justifications for the same old behavior.

Update Jan. 11, 2018: The official Sonic the Hedgehog Twitter account has weighed in with this meme, encouraging Knuckles memers to behave themselves and consider that Uganda is a real place.

Update 2:48pm, Jan. 25: The Ugandan Knuckles meme has spread from VRChat to competitive gaming. Fans have been holding up Knuckles signs at esports matches, and at least three Overwatch League teams posted Knuckles memes on Twitter. The tweets were deleted after Kotaku pointed out the meme’s racist connotations.