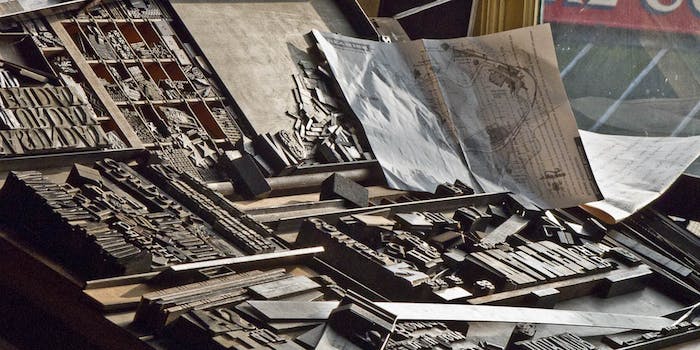 How typography changes the way you see the world

It's not your imagination: Your fonts are talking to you.

I run design for a small startup. I spend most of my energy thinking about things like user-flows, colors, layouts, and (of course) typefaces. When I explain what I do to most people outside the Bay Area, one of the common reactions is a mix of confusion, condescension and sarcasm:

When I don’t take this as a cue to change the topic, I pry into the mind of this non-designer to try to uncover what makes this topic so polarizing. As I’ve done this more systematically, I’ve realized that typography is a lot like philosophy: People are either semi-obsessed or completely indifferent. Some can talk for hours, others didn’t realize the topic existed as a standalone concept.

But what creates this binary distinction between otherwise-aligned individuals?

Awareness. People who are aware of how much of an effect type subconsciously has on their perception of meaning can’t help but be drawn to its elusive subtlety and quiet power. People who aren’t just see words—or think they do.

Take yourself back to the last time you were in a public subway station. How do the people around you tend to look and act? They aren’t smiling or frowning; they’re just standing without much emotion. The phrase “strongly neutral” comes to mind. But zoom-out for a moment and observe the details of your surroundings. More than likely, there are many informational placards, posters, and screens denoting the train routes and arrival times. And, chances are, most of this information is set in Helvetica Bold.

This may seem like an innocuous detail, but Helvetica Bold tends to add a “strong neutrality” to text. Somehow, the soul of the typeface is defining the vibe of the space, while masquerading itself as an innocent content delivery system.

And it’s not just subway stations. Now you’re in an elementary school. All visible words are set in Comic Sans Medium or some equivalent. Though despised by designers for less-than-rational reasons, Comic Sans generally evokes associations of playfulness, youth, and curiosity. The informal type perfectly exudes the intentions of the space.

The pattern continues: Go to NASA and you’ll see some sci-fi-inspired lettering, go to a bank and you’ll be greeted by a trustworthy Roman serif. The values, meaning, and purpose of a place are, intentionally or not, expressed as the shapes of the letterforms it communicates through.

From a pure linguistics perspective, however, there is no difference between a word written in Helvetica and a word written in Comic Sans. Flower is Flower is Flower. Through this lens, a word’s only importance lies in its referentiality to a cultural concept. But, linguistics is at fault here. That’s not how we experience written language. The visual representation of words gives us additional layers of meaning beyond the sentence’s pure content or structure. The way something looks affects how it is perceived. Ben Franklin would only allow his writings to be printed in Caslon because he knew that books are judged by their covers and words are judged by their font.

Or, maybe I have it backwards. Maybe it’s not the typography that is influencing the space, but the space that is influencing the typography. Maybe—but you’d be forgetting the simple fact that places, websites, brochures, and street signs are made before people interact with them. They cannot possibly be influenced by the space because they are of the space. They were there before the place was alive to have the essence that it has.

There is, however, a back and forth. The exact same font could be both an example of awesome and terrible typography depending entirely on the situation.

Try it for yourself. Imagine the word “cat” written in your mind. Just as you can’t imagine a colorless chair or sizeless car, it’s impossible to imagine “cat” not set in a particular font. Whether in ink or pixels or neurons, we always experience words materialized into a specific typeface set at a particular size, spacing, and weight. The visual representation of letters is an essential element in the transmission of their content.

These details are known as aesthetic and secondary to the content, even though oral language’s equivalent—vocal tone—has been long revered for its importance. If you’ve ever been to a comedy show and tried to recall the highlights for a friend, you know how essential accurate delivery is. Louis C.K.’s jokes just aren’t funny when I tell them. The artistic use of vocal tone and body language patterns provides a dimension of meaning that is required to appreciate the funny.

Typefaces are the same way. They add additional information that, if done thoughtfully, can provide clearer meaning and a deeper emotional resonance. There are even some 1:1 relations between oral and written language. Italics exists as the visual counterpart to orally emphasizing certain words more than others. When in body text, boldness exists to slow your reading speed. The sudden increase in contrast reduces your processing speed, giving the bolded words relative temporal emphasis. That’s my theory at least.

This matters in visual language because it matters in audible language. There is more to communication than pure content, and because of this, typography marks the precise intersection of science and art. Science cares solely in distinguishing the world of fact from non-fact. “Energy is mass times the square of the speed of light” is a fact. “Avenir is really clean” isn’t. By definition, science doesn’t deal in subjective experience, but in objective, provable, physical reality.

But this inherent subjectivity is what gives typography its tremendous communicative power. Each typeface is imbued with unique associations for each individual, creating what feels like a personal connection to the observer. After all, there are no real reasons why certain letter shapes make us feel certain ways. It falls just out of the purview of science into something that transcends it, just as art does.

As you increase your awareness of type, you’ll start to realize how every place and object is provided with its essential soul by the letterforms it uses. You’ll be able to see into companies, books, albums, and facilities to understand what values they hold dear. You’ll be able to express yourself through shapes that match the tone of what you are saying, while building your immunity to the geometric hypnosis clever designers regularly use to hack your subconscious. Typography has been kind-of-a-big-deal since antiquity and will only matter more as our lives are gradually sucked into screens—that’s why it matters.

This piece originally appeared on Medium and has been reprinted with permission.