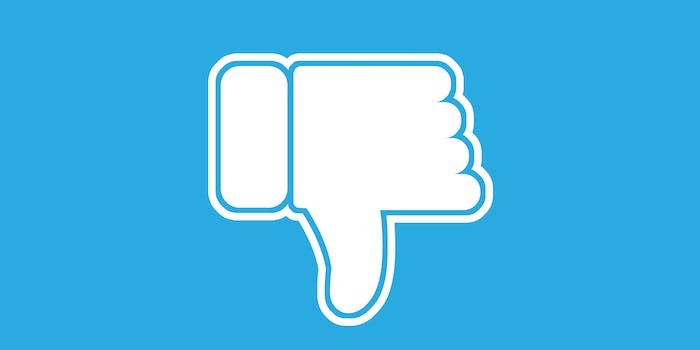 Twitter just started testing a dislike button for some iOS users, and the idea is already earning backlash on the platform. According to a post from Twitter support (and the automated message that iOS users receive if they’re part of the test), the new “dislikes” aren’t actually visible. But people still seem to hate it, partly because news of a dislike function is spreading without any context for how it will work.

“We’re testing this to understand the types of replies you find relevant in a convo, so we can work on ways to show more of them,” explained Twitter Support. “Your downvotes aren’t public, while your upvotes will be shown as likes.” In other ways, it’s another way for Twitter to tailor people’s timelines.

The announcement also clarified that it’s “not a dislike button,” but it’s a thumbs-down button that allows people to express their dislike of a post. So yes, it is indeed a dislike button. It’s just not a public downvote system like Reddit, YouTube, or Facebook.

As news of the dislike button spread, people began to speculate about how it might be used by the platform’s more toxic users. Twitter has a serious harassment problem, and users are concerned about the idea of the dislike button being weaponized. Meanwhile, there are some theories that the dislike button may reduce harassment because haters would essentially “use up” their negative energy by hitting the button instead of typing out a negative message. It’s kind of the opposite of how people will casually like a tweet without bothering to reply.

However Twitter users really don’t need to be concerned about the dislike button being weaponized in this manner, as Twitter made it very clear that people won’t be able to see the dislikes. It’s more of an information-gathering exercise for Twitter itself, to help tailor the user experience. By disliking someone’s tweet, you’re basically expressing a desire to see less of their content—something that’s already possible via the block or mute functions.