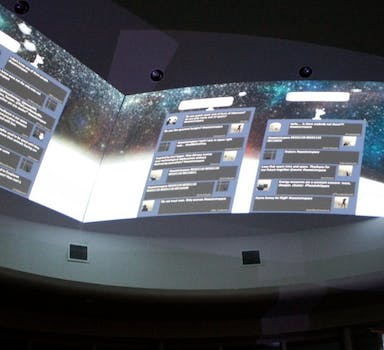 Tweets in Space event blasts off without a hitch

The two most common words earthlings wanted to send to possible extraterrestrials were "please" and "love."

Some of your tweets will soon be headed out of this world. Quite literally.

During an event held at the International Symposium on Electronic Art in New Mexico, Nathaniel Stern and Scott Kildall captured all tweets using the #tweetsinspace hashtag over a half-hour period. In  a few short weeks, the duo will beam the hundreds of messages they received to GJ667Cc, a planet some 22 light years away that has the capacity to support life.

Around 1,500 tweets (approximately one per second) were sent during the performance period, and the “vibe was intense, inviting, and provocative all at once,” Stern and Kildall told the Daily Dot. The team behind the project considered the event a big success, with the tweets ranging from simple greetings to aliens and asking for photos of “triple-star sunsets,” to worries about the destruction of Earth and questioning extraterrestrial social and economic systems.

“All those voices together existentially express an inordinate amount of wonder and fear, curiosity and happiness, hope and cynicism, and more,” Stern and Kildall wrote in an email. “They perform several dozens snapshots, many threads of thought and conversation and potential, in all of our humanity. We’ve very humbled by the experience.” Stern and Kildall had indicated they would not include any tweets that used hate speech in the transmission, which is set to take place within the next view weeks at a Florida facility as GJ667Cc comes into clearer view. While they’re still trawling through all the tweets, they have not yet found any that will be excluded.

Some analysis run on the tweets sent by the community during the performance period revealed that outside of the terms “tweet,” “space,” and articles like “the” and “an,” the two most commonly used words were “please” and “love.”

“Hello,” “here,” “help,” and “peace” were among the other most popular words used, suggesting a deep yearning to make contact with aliens and understand more about their cultures. Stern noted that he wasn’t sure of his favorite tweets to emerge from the event, but noted some “gems” recorded in the first few moments:

“Also, do you guys do mind-altering things?  My favorite is a delicious form of ethanol made from wheat; a species of plant. #tweetsinspace.” —@cvburkett

“Attention, alien scum. I declare Space War. Please meet me in the car park at the Yorkshire Grey branch of McDonald’s. #tweetsinspace” —@cjjc

“#TweetsInSpace DEATH TO EARTH. ERADICATE THE PLANET. ALIENS, USE THE EARTH’S REMAINS AS AN APHRODISIAC.” —@JackedCunning