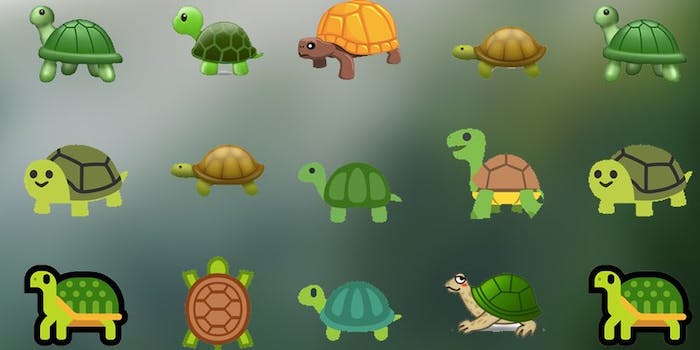 This definitive rating of turtle emoji is extremely strong

Which turts are very good? Which are not our friends?

One of the quirks of emoji is that a bunch of tech companies have their own designs, so any beloved icon can look radically different on another operating system (Apple’s squirt pistol emoji is perhaps the best-known example). That means there are about a dozen distinct turtle emoji out there. Fortunately, someone on Tumblr has created a definitive list of turtle ratings, so you know which turts to be friends with and which are ugly trash.

Poison-liker’s “official ranking of every turtle emoji on emojipedia” is funny and it is honest. It is an eye-opening spiritual journey at the end of which you will accept the truth about little cartoon turtles. It has more than 30,000 notes in less than a day and is also starting to blow up on Twitter.

Oh my god, I just had to share this pic.twitter.com/em65bbDGKW

If “has good turtle emoji” is part of the criteria for your next phone purchase, take note: Google’s turtle is perfect and has a beautiful smile, while Apple’s is a lowly blob. Let us never speak of Samsung’s turtle again.