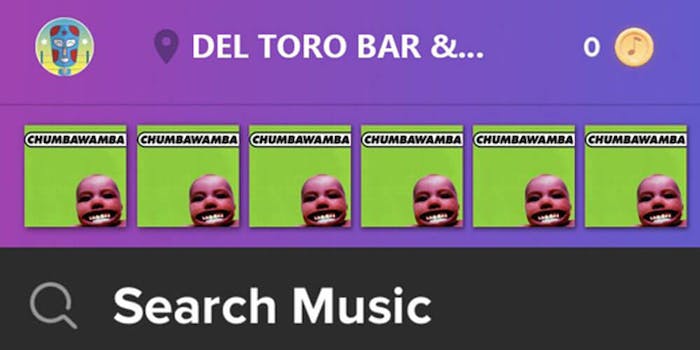 'You drinking a whiskey drink or a vodka drink?'

Who doesn’t love “Tubthumping,” the 1997 hit from the British rock band Chumbawamba? The banger hit No. 6 on the U.S. Billboard Hot 100 the year it was released and topped charts in Australia, Canada, Ireland, Italy, New Zealand. He gets knocked down! And then gets back up again! You’re never gonna keep him down!

OK—so maybe it is kind of repetitive. And was once named on a list of the 20 most annoying songs by Rolling Stone. In other words, probably a song that you don’t want to, say, hear over and over and over again while enjoying a night out with friends.

But that is precisely what one poor woman was subjected to during a girls’ night out, as Twitter user Henpecked Hal shared on Twitter this week.

“My wife left me home alone with the kids to go out drinking with her friends,” he wrote. “A lesser man might whine and complain, but instead I’m just playing Chumbawamba’s 1997 hit ‘Tubthumping’ over and over and over. On the jukebox at their bar. Using the TouchTunes app.”

My wife left me home alone with the kids to go out drinking with her friends. A lesser man might whine and complain, but instead I'm just playing Chumbawamba's 1997 hit "Tubthumping" over and over and over. On the jukebox at their bar. Using the TouchTunes app. pic.twitter.com/jqhbOLdddQ

True to his word, Hal shared a screenshot of the touchscreen app—as well as a devious screenshot of a text message conversation with his wife in which he diabolically strung her along with clues from the “Tubthumping” lyrics until she figured out he was behind it.

While Hal’s wife may not have enjoyed the prank, the rest of the internet applauded his wherewithal—quite literally, in a few instances.

TouchTunes even weighed in and revealed that the prank literally made a spike in the song’s metrics that day.

But not everyone was so easily impressed. “How does this tweet about a guy being a dick to his wife because she got to go out for a night with her friends and he (gasp!) had to take care of the kids have twenty-five thousand likes,” pointed out Twitter user @jaythenerdkid. “Literally what the fuck is wrong with you all.”

You know what they say, revenge is a dish best served thumping.