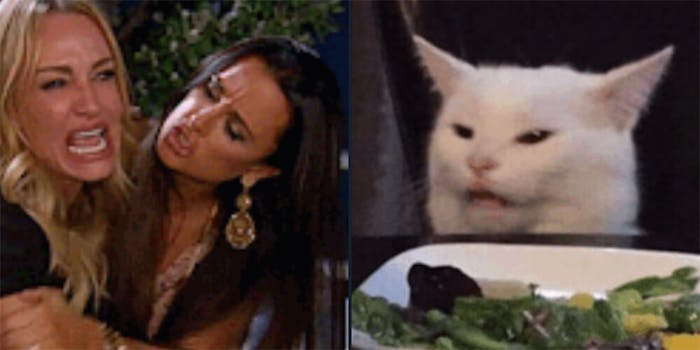 With many GIFs comes great responsibility.

Thanks to a newly discovered Twitter hack, you can now post multiple GIFs in a single tweet—and people are celebrating the new way to create memes.

The GIF hack, originally shared by user @thuglyfe, works by converting GIF files into APNGs or APNGs. The conversion leads Twitter to recognize the files as image files and thus allows users to post multiple GIFs instead of just one at a time.

“Okay, to do this, user @thuglyfe wrote. “1. Find a gif. 2. Insert that gif into https://ezgif.com/gif-to-apng 3. Once you’ve done that, click convert. 4. The gif that you entered will then be converted to an APNG file 5. Save that file. 6. Log on to Twitter via Safari 7. Select the files and press tweet.”

Okay, to do this:

1. Find a gif.
2. Insert that gif into https://t.co/URBn9RaObl
3. Once you’ve done that, click convert.
4. The gif that you entered will then be converted to an APNG file
5. Save that file.
6. Log on to Twitter via Safari
7. Select the files and press tweet. pic.twitter.com/bAdDyeCTji

User @thuglyfe, who asked to be identified as Dari, said he stumbled upon the hack while playing around on ezgif.com, a site he’s used for years to edit GIFs.

“I never knew there was another file that could possibly be animated, I thought GIFs were the only type of animated image files, but I was clearly wrong,” Dari told the Daily Dot. “I found it very interesting and decided to see if the files would work on Twitter and surprisingly it did! I made the tweets in like GIF sets that you would normally see on a place Tumblr.”

The hack, though a little complicated, quickly took off. Users started using it to post multiple clips from movies, shows, music videos, and to combine multiple GIFs to make one larger moving picture.

“I figured I should share how it works with the people that were curious about it because it’d be extremely selfish not to,” Dari told the Dot. “After doing that I started seeing more and more tweets like mine and it was nice to know that most people actually understood the directions on how to get it done. People had a lot of fun with it, and so did I.”

“The power of multiple gifs,” user @joaquinsjoker wrote, showing off the hack with a couple of GIFs from Joker.

the power of multiple gifs. pic.twitter.com/HIr5JD7Qyk

i hope it worked pic.twitter.com/bxIpU3M1ur

now that we can upload multiple gifs in a tweet get ready for loads of peraltiago being extra soft pic.twitter.com/kLvpyfh7Ec

Some people, however, said they had trouble with the multistep process of the hack. Android users, in particular, couldn’t seem to access the hack and pleaded for Twitter to implement the multiple GIF ability into the site.

Twitter, which did not immediately respond to the Daily Dot’s request for comment, has not announced any plans to add a multiple-GIF feature to the site.