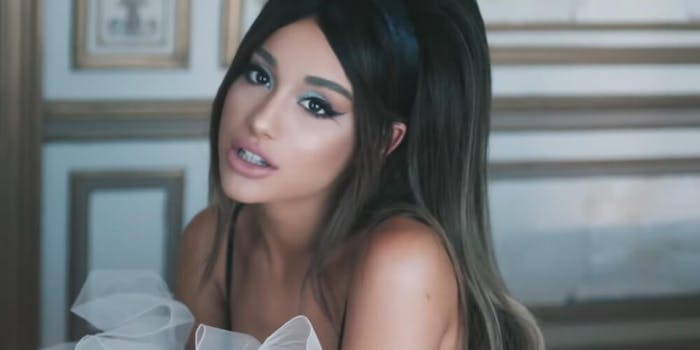 TikTok user @prodpsilo was the first to start the trend by uploading a video on Nov. 15. In the comical video, the user makes a peanut butter and jelly sandwich with just their hands which are covered in the now-signature long sleeves. The video received over 191,500 likes and 15,800 shares in a week.

Soon after, TikTok received an onslaught of videos mocking Grande’s sleeved hands comically doing everything from serving Thanksgiving dinner to putting on makeup and even submitting an assignment in school.

The most recent video made it to Instagram, showing user @Vfiles hilariously washing their hands without rolling up their oversized sweater. It received a reply from the pop star herself.

The video was uploaded with the caption: “How @arianagrande washes her hands.”

It appears that Grande took the roasting in stride.

In screenshots published by InStyle, she jokingly responds to the post with two comments: “man if y’all don’t leave me alone” and “this made me so anxious.”

Recently another TikTok video on social media got the singer’s attention and candid response. The video featured Paige Niemann, a Grande lookalike who often recreates Grande’s outfits and photos on social media.

In the video, Grande’s doppelganger mouths dialogue dressed up as Cat, a character from her former role on Nickelodeon’s “Victorious.”

“i just wonder whyyyy the cat voice / dialogue,” Grande replied. “i am sure she is the sweetest sweet sweetheart forreal !! but it’s definitley [sic] bizarre seeing people blend the two worlds lmao.”

i just wonder whyyyy the cat voice / dialogue. 😭 i am sure she is the sweetest sweet sweetheart forreal !! but it’s definitley bizarre seeing people blend the two worlds lmao.

Grande seemed to be more thrown by her fan’s reference to her former role than by their astonishing resemblance.