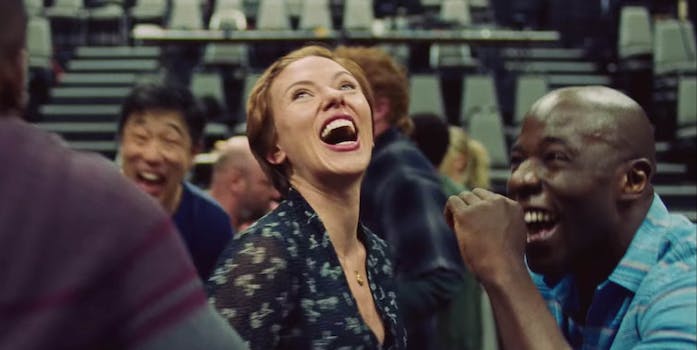 Johansson’s character, Nicole, is an actress in the midst of a divorce from her director husband, Charlie (Adam Driver). Early in the film, Charlie comments that “She’s a great dancer, infectious.” The Marriage Story Twitter account posted a clip in which she shows off her moves, and it quickly became a meme.

A celebration of love. #MarriageStory is now on @Netflix. pic.twitter.com/SKfEvj1qKy

There were jokes about how white people dance, and the things white women get excited about.

ever since i saw someone said that white people dance like they’re summoning rain i can’t look at this clip the same way again pic.twitter.com/bNQdp1B8m2

when there’s a sale on live laugh love signs pic.twitter.com/AAabKIqYUa

You know, that is how people in pharmaceutical ads dance.

"This medicine may cause death"

The people in the ad:pic.twitter.com/NaRqOec3lb

Of course, it syncs up with the Succession theme.

There was also recognition.

It made it’s way to TikTok, too.

Some people took issue with the original tweet’s statement: “A celebration of love.” And, to be fair, the dancing scene happens in the first five minutes of the film, before all the depressing stuff starts.

Celebration of love? man dis shit had me depressed af like I was in the relationship.