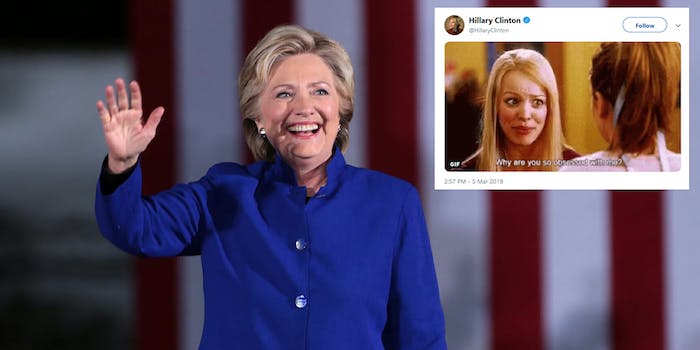 Clinton ruled out a presidential run in 2020.

Former Democratic presidential nominee Hillary Clinton posted a GIF from Mean Girls on Tuesday evening, presumably responding to President Donald Trump lamenting that she would not seek another run at the presidency.

The president tweeted his comments on the news that Clinton had ruled out running for president for the third time in 2020.

Clinton made her intentions clear when speaking with News 12 Westchester, telling the news outlet: “I’m not running, but I’m going to keep on working and speaking and standing up for what I believe.”

The news seemed to disappoint Trump.

“(Crooked) Hillary Clinton confirms she will not run in 2020, rules out a third bid for White House,” he wrote on Twitter on Tuesday evening. “Aw-shucks, does that mean I won’t get to run against her again? She will be sorely missed!”

“(Crooked) Hillary Clinton confirms she will not run in 2020, rules out a third bid for White House.” Aw-shucks, does that mean I won’t get to run against her again? She will be sorely missed!

Less than an hour later, Clinton responded by posting the “Why are you so obsessed with me?” GIF from the movie Mean Girls. It’s a quote from central mean girl and Regina George, played in the 2004 internet favorite by Rachel McAdams.

While we won’t be seeing the same kind of Twitter spats between Clinton and Trump as we did in 2016, you can be sure there will be new ones between the president and whoever Democratic voters decide will be their presidential nominee for the 2020 election.