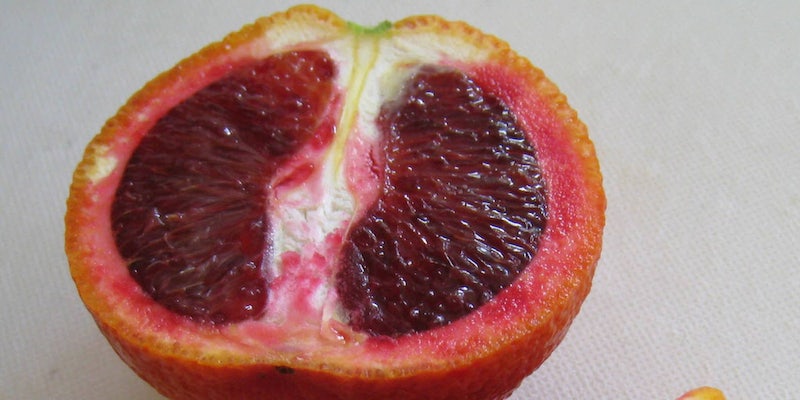 'I thought this might also be a valuable educational experience for him.'

GOP presidential frontrunner Donald Trump has spent the past week throwing around the phrase “woman’s card” in his attacks against Democratic frontrunner Hillary Clinton, and it’s—shocker—pissing some women off.

At a Tuesday primary victory speech, Trump claimed that if Clinton were a man, she wouldn’t even get 5 percent of the vote. He continued: “The only thing she’s got going is the woman’s card, and the beautiful thing is—women don’t like her.”

In the hours since Trump’s notorious woman’s card speech, Clinton has responded with her own snappy tagline (“deal me in“), the Internet has exploded with #womancard memes, and one industrious Twitter user has bombarded Donald Trump with the sopping wet, clotted, gloriously gross details of her menstrual period.

Why? 24-year-old Los Angeles resident Lindsey Toiaivao—known as @heysoulclassicz on Twitter—told the Daily Dot that as she cramped and bled on Wednesday, she thought “it might be funny to share this experience with the one person who would find it the most disgusting and infuriating.”

“Honestly, when I woke up yesterday I hadn’t thought to share anything with Donald Trump,” said Toiaivao. “Given his casual and virulent misogyny over the course of the campaign and his recent comments about Hillary pulling ‘the woman card,’ I thought this might also be a valuable educational experience for him.”

In her first of many tweets, Toiaivao chided Trump with, “You can’t just whine about the woman card and expect not to hear the gory details about a stranger’s loose uterine lining,” then launched into the most epic period-themed Twitter thread of all time.

. @realDonaldTrump WOOF honestly where to start? It's early on, somewhere btwn days 2 and 3 but recently I've been starting w like thicker

@realDonaldTrump brownish blood like. With the consistency of soupy alien boogers? Webmd says this is normal – "old blood" from my last pd.

@realDonaldTrump You know when you're 12 and learning how to put in a tampon for the first time and the first several times you do it wrong?

@realDonaldTrump and you don't end up getting to swim at all bc you didn't put the tampon in right so you'd prob attract sharks w/ ur blood?

@realDonaldTrump period blood is pretty viscous actually? Why is that? Where are the period scientists? Do they have enough funding?

@realDonaldTrump ps I assume your silence is bc you're thoughtfully absorbing all my period details. Like a giant human tampon! Bless you.

@realDonaldTrump some women have lost limbs or even died of TSS! It's a real thing! I swear! The woman card has some pretty big drawbacks.

We haven’t reposted every single tweet here, just a few highlights. Each tweet in the thread must be read and savored—cared for like each precious unfertilized egg that causes a uterine lining to shed in thick, shiny chunks.

Toiaivao said that she had never thought to refer to her period as a “woman card,” but the experience has inspired her to christen her menstrual time with a new moniker.

“I may start calling it my Trump card—because when I have it I become irascible and hateful, and unmentionable things start spewing from my wherever,” said Toiaivao.

As for Trump’s reaction to the onslaught of intimate details, we may never know. He hasn’t responded.

“Likely, some misogynistic social media intern at the Trump campaign has browsed those tweets and cringed,” she said. “And the thought of that eases my cramps considerably.”