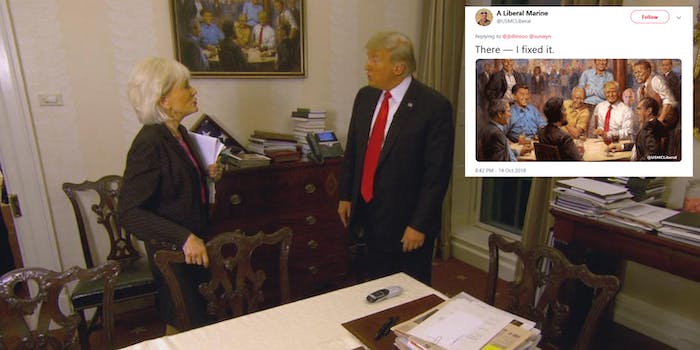 Several people 'fixed' the painting by adding other people into it.

President Donald Trump spoke with 60 Minutes in an interview that aired on Sunday night, where he discussed a number of topics, including Russia, Defense Secretary James Mattis, North Korea, and Special Counsel Robert Mueller‘s investigation, among other topics.

However, one portion of the interview appeared to catch the internet’s eye—a painting of Trump with other Republican presidents that is hanging in the White House.

Now on 60 Minutes: There's less than a month until the mid-term elections. Hear what President Trump has to say about some of the issues that will likely be motivating voters at the ballot. pic.twitter.com/4WYnh3t0hy

The Daily Beast reports that the painting, called “The Republican Club,” was created by Andy Thomas and given to the president by Rep. Darrell Issa (R-Calif.).

It shows the president at a table, drinking what appears to be Diet Coke, with other presidents such as Richard Nixon, Teddy Roosevelt, Ronald Reagan, George W. Bush, Abraham Lincoln, and others.

Some people online decided to “fix” the painting by making their own additions to it. Some of the changes included Russian President Vladimir Putin being put into the painting or trying to make Trump look “more realistic.”

One person even added the plaid shirt guy who got some attention at a Trump rally last month.

There — I fixed it. pic.twitter.com/ZiVpSviQyG

Others were just left in awe that such a thing was hanging in the White House.

Really? Is this for real? https://t.co/UCf6zLshpm

Well we know at least Nixon is wearing a wire. https://t.co/fJKBGDfAxM

Vanity, thy name is @realDonaldTrump! https://t.co/zOvmnNUZWR

If you look closely at the screenshot 60 Minutes shared, there is also a bowl of Starburst candy near the photo.