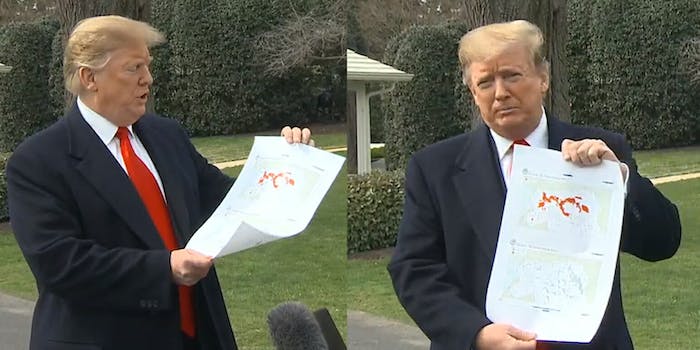 Trump’s latest prop, a map of ISIS, gets memed

Gritty, Beto, and others made appearances.

President Donald Trump brought out a map in front of reporters on Wednesday showing area controlled by the Islamic State, also known as ISIS.

The map reportedly showed the difference in land controlled in Iraq and Syria on the night of the 2016 presidential election compared to present day. The Washington Post reported that Trump said the last dot showing controlled land would be gone today.

The Trump ISIS map was brought out by the president as he spoke with reporters before traveling to Ohio.

But pictures of the map seemed to catch the imagination of the internet. Naturally, it got memed.

Fixed this for you @realDonaldTrump. pic.twitter.com/w2sOWYYkzr

Of course, Gritty was placed onto the map.

And potential 2020 rival Beto O’Rourke’s odd habit of standing on tables and counters also made its way into the memes.