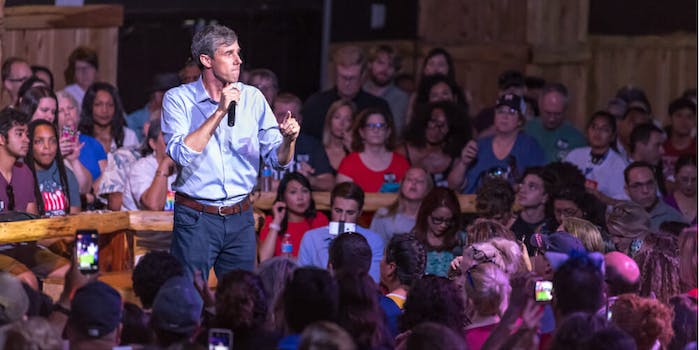 The news of O’Rourke’s candidacy was met with overall enthusiasm. Supporters from his close Senate loss followed him into the presidential race. Within the first 24 hours, O’Rourke had raised more than $6 million. But photos and videos of numerous speeches and fundraisers in the days leading up to and following his announcement revealed something: He likes to stand on top of things.

Dozens of photos began emerging of the candidate perched on tables, counters, chairs—really anything that could support his weight. Rarely is there a photo of the 46-year-old standing on solid ground. Within no time, the lovely and industrious people of the internet took to memeing O’Rourke’s love for high places—in particular, a photo of him reportedly in Detroit. On a counter.

If you look into a shiny counter top and say "Beto" 3 times, he'll instantly appear standing on it to give a stump speech.

is he running to be president or spider-man pic.twitter.com/O5c4qkiqx1

When you tryna lock down that SpiderVerse vote pic.twitter.com/qxhAQ1nMCI

the floor is single payer pic.twitter.com/bg2ISuHeoS

One user compared O’Rourke’s counter-standing to “the ‘cool’ teacher who sits backwards in chairs.”

anyone:
beto: stands on your fucking counters with his shoes on

beto stands on counters bc he knows he’s a snack

Twitter user Addy Baird thought to ask the hard questions. “Does anyone have video of how Beto gets ON the counters in the first place,” she tweeted. “Is it, like, a colton-level fence jump? Or like an awkward butt-first, leg, leg thing?”

does anyone have video of how beto gets ON the counters in the first place? is it, like, a colton-level fence jump? or like an awkward butt-first, leg, leg thing? or??? if you have video please send it

I’ve spent years training my cats not to jump up on the tables and counters and now they’re all like “BUT BETO DOES IT”.

Even The Daily Show got in on it late Monday, tweeting numerous photoshops of O’Rouke perched on high with the accompanying text, “Damn has this guy been on EVERY counter?”

Damn has this guy been on EVERY counter? pic.twitter.com/G4eSkO2yHJ

O’Rourke’s strange obsession with raised surfaces even started not one, but two Twitter accounts—”Beto on elevated surfaces” and “Beto Standing On Counters.”

3/15/19- Beto on another countertop in Mount Pleasant, Iowa pic.twitter.com/fc9kpzm2Ya

The discussion may have nothing to do with policy, but O’Rourke certainly has people talking. Now to get them talking about something other than countertops…