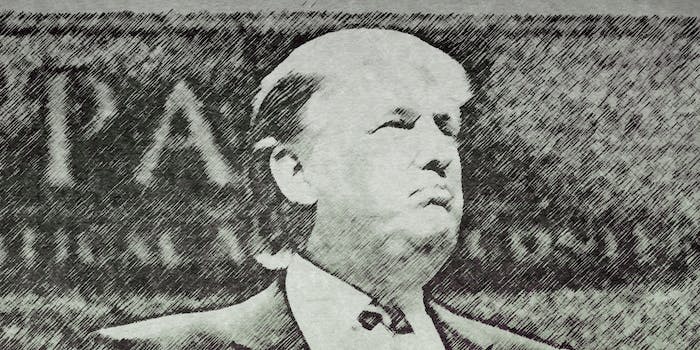 Form submitted in accordance at Article 12, Section 3 of the Snopes Convention.

Donald Trump is a secret atheist.

Donald Trump, the heir to a multimillion-dollar real estate empire who turned his family fortune into a career as the host of Celebrity Apprentice, is currently the front-runner for the 2016 Republican presidential nomination. This rumor would seek to put in voters’ minds the possibility that, unlike the vast majority of Americans, Trump does not believe in God. Therefore, making him fundamentally untrustworthy to serve as commander-in-chief because reasons.

In his quest for the Oval Office, Trump has repeatedly played up his religiosity; however, his proclamations of religion have been awkward—and that’s putting it charitably. In a recent interview with the Christian Broadcasting Network, this is how Trump responded to a question about his personal vision of God:

Well I say God is the ultimate. You know you look at this? Here we are on the Pacific Ocean. How did I ever own this? I bought it 15 years ago. I made one of the great deals they say ever. I have no more mortgage on it as I will certify and represent to you. And I was able to buy this and make a great deal. That’s what I want to do for the country. Make great deals. We have to, we have to bring it back, but God is the ultimate. I mean God created this [points to his golf course and nature surrounding it] and here’s the Pacific Ocean right behind us. So nobody, no thing, no there’s nothing like God.

Trump was asked about his personal relationship with God and he responded by talking about what a great deal he got on buying a golf course. Does that sound like someone who is telling the truth? Before you answer that question, remember this is a vicious Internet rumor and, as such, you are legally required to read Trump’s response with the least-charitable interpretation possible.

When Trump appeared on Bloomberg’s With All Due Respect program last month, he was asked to name one or two of his favorite Bible verses. The question came shortly after he had begun stating that the Bible was his favorite book, even ahead of his own Trump: The Art of the Deal, which is especially high praise because his second-place book contains his name in the title.

Does Trump’s response here remind you of anything?

While nearly one-third of Republican voters in Iowa think the practice of Islam should be outlawed, atheists are the least-trusted religious affiliation in America. Forty percent of Americans said they would not vote for an atheist president.

Would there be any sort of karmic justice to the subject being harmed by this rumor?

No, not that I can think of.

Are you sure? Maybe something the rumor’s subject told Fox News in 2011?

“He doesn’t have a birth certificate. He may have one, but there’s something on that, maybe religion, maybe it says he is a Muslim… I don’t know. Maybe he doesn’t want that.”

The Donald doth protest too much.

Preferred venue for transmission of rumor

Groups that will offended by this rumor

How would you defend yourself when called out about starting this rumor?

I was just asking questions.

Pursuant to Article 12, Section 3 of the Snopes Convention, all Internet rumors are required have a Snopes ID#. Please list your rumor’s Snopes ID#

Application processing takes, on average, three-to-six weeks. What do you plan on doing in the meantime?

Photo via Gage Skidmore/flickr (CC by 2.0) | Remix by Max Fleishman