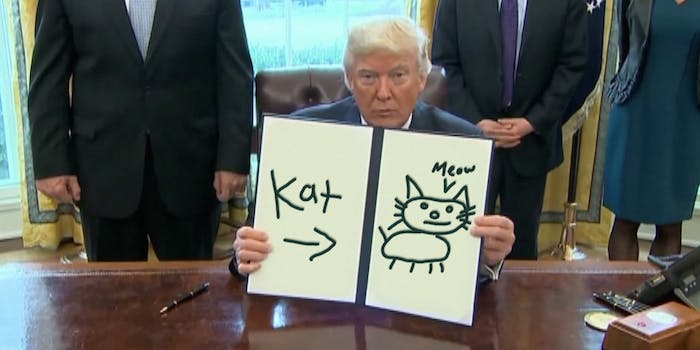 Screengrab via The National/YouTube Remix by Jason Reed

President Donald Trump‘s unveiling of his first executive order—an attempt to roll back the Affordable Care Act—provided perfect fodder for a new meme. When a president holds up a piece of paper that can be easily Photoshopped, that’s a gift to the internet. But now, one Twitter account is taking the meme to the next level: animated GIFs.

Trump Draws GIFs show the president proudly displaying childlike drawings to the press, awaiting the applause due to him for drawing a house or cat.

This version of the executive order meme impugns Trump’s intelligence in a manner that calls to mind the case against the previous Republican president, George W. Bush. This angle of attack is doomed to fail, of course, because Trump has a very high IQ. One of the highest. (Source: Donald J. Trump.)