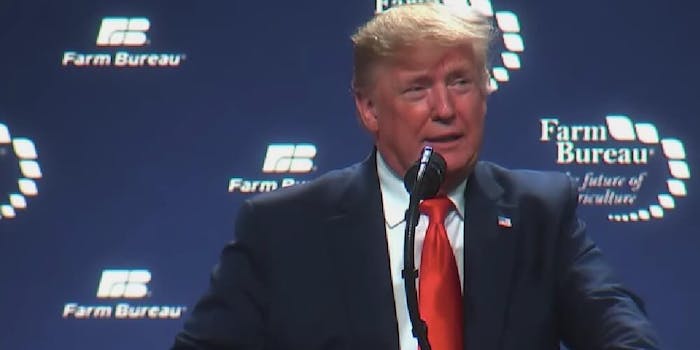 No, the first words of Trump’s tweets don’t match up to lyrics of ‘Break My Stride’

Yes, people really fell for this.

A viral video appearing to show President Trump trolling the internet by making the first words of his tweets come together to match the lyrics of “Break My Stride” by Matthew Wilder has been proven to just be a made-up contribution to a TikTok challenge.

TikTok’s latest meme uses the 1983 song to trick friends and family. It starts with a person texting another the opening lyrics of the song, “Last night I had the strangest dream.” The objective is to try to keep the conversation going for as long as possible without the recipient catching on.

A video that makes it look like Trump jumped on the meme train himself was recently posted by TikTok user @dominic.debettencourt. Of course, people who actually use TikTok were quick to realize it was all part of the current trend, but all bets were off once the video migrated over to Twitter.

All it takes is a quick perusal of Trump’s tweets (if you can bear it) to realize the words of his tweets have been changed to match up with the lyrics of the song. But if there’s one thing we’ve learned from social media over the past decade, it’s that people absolutely hate fact-checking, whether it’s over something important or something silly.

Good meme plausible enough to believe and enough of hassle to check that people probably won't.

The fake was achieved by using the inspect element aspect of Google Chrome, which essentially allows users to change text information on their screen and take fake screenshots, as several people on Twitter pointed out.

“His rts are in same order and from same people as in the vid but all of them have been changed to incorporate the words to the song,” Twitter user @uualker wrote.

I don’t want to be that one guy (but) guy just inspected element. His rts are in same order and from same people as in the vid but all of them have been changed to incorporate the words to the song

And though Trump potentially tweeting out lyrics to a weird ’80s song definitely lands on the “something silly” end of the spectrum, it was still vaguely amusing to watch people fall for the joke. Or, rather, it would have been if not for the knowledge that they’ll fall for pretty much anything they want to believe.

He's the Maestro…Ring Leader of this CRAZY CIRCUS!!!

Please don’t use trump and genius in the same tweet

That is so awesome! They are totally having fun in office. I’m glad. They deserve it!

And, of course, some refused to believe it was fake even when it was explained to them.

“It’s from August,” one user tried to claim.

Some people's twitter feeds are not in chronological order. Hell I get tweets from hours ago before minutes ago half the time

Of course, with so many of Trump’s tweets sounding fake until you go and look at the insanity with your own two eyes, it’s always hard to guess what’s going to be real and what’s not. But the President thinking far enough ahead to gradually tweet out the lyrics to “Break My Stride” was definitely, irrefutably fake news.