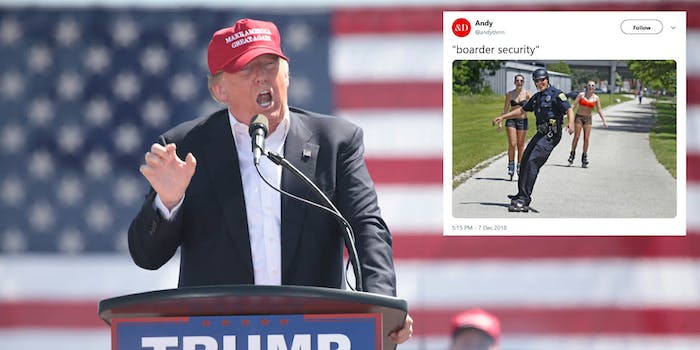 This isn't the first time he's made this typo.

President Donald Trump misspelled the word “border” in a tweet on Monday morning where he was blasting Democrats for not agreeing with his desire to increase security along the country’s southern border.

“Anytime you hear a Democrat saying that you can have good Boarder Security without a Wall, write them off as just another politician following the party line. Time for us to save billions of dollars a year and have, at the same time, far greater safety and control!” Trump wrote early Monday.

This isn’t the first time the president has misspelled “border” when talking about his wall.

“Arizona, together with our Military and Border Patrol, is bracing for a massive surge at a NON-WALLED area. WE WILL NOT LET THEM THROUGH. Big danger. Nancy and Chuck must approve Boarder Security and the Wall!” he wrote on Dec. 7.

While his misspelling of “border” isn’t new, Twitter had a field day with what they believed “boarder security” really was.

Others just mocked the president for yet another typo.

My legal Councel says Boarder Security is hearby the unpresidented Smocking Gun & my judgement is to develope polices & not waite for rediculous politicions; it's an honer to be payed for covfefe.

(these 12+ misspellings were actually tweeted by DT, who can afford spellcheck) https://t.co/2nGEZRSEhq

you can get all the Boarder Security you want but gamers are still gonna 360 mctwist over your Wall pic.twitter.com/BshRGgjbub