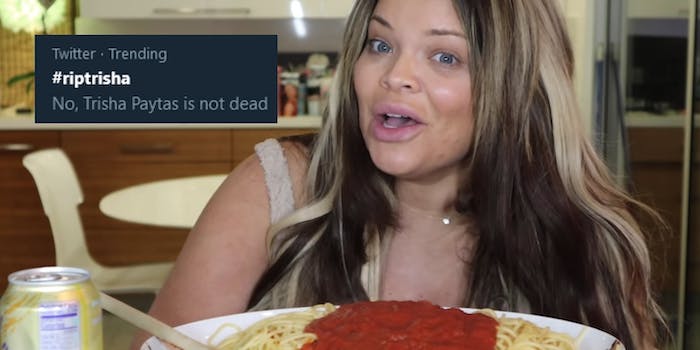 #RIPTrisha became one of the top hashtags in the U.S. on Monday night.

YouTuber Trisha Paytas is no stranger to controversy, and she once again riled up Twitter users on Monday when the #riptrisha hashtag became one of the top trends in the United States. The 32-year-old social media personality was rumored to have died in a car accident, a baseless claim that nonetheless prompted a deluge of memes.

Word spread on Twitter that TMZ had apparently reported that Paytas had died in a car accident, according to MEAWW. But TMZ never shared this news, and the rumor collapsed under scrutiny. Even Twitter debunked the #riptrisha hoax, writing on its Explore page, “No, Trisha Paytas is not dead.”

Of course, viral trends are rarely beholden to facts, and the #riptrisha hashtag still spread like wildfire. Many Twitter users appeared to know it was a hoax, instead using the hashtag to share memes at Paytas’ expense.

“STREETS SAYING TRISHA PAYTAS GOT HIT BY A CAR?? #riptrisha,” one user wrote, attaching a clip from the movie Ma in which Octavia Spencer runs over a white woman with her pickup truck.

Another user shared a photo of “the evolution of trisha paytas” that consisted of a cartoon woman, a totaled car, and a gravestone, a riff on the “Bimbofication” meme.

Many of the meme-makers spared no tears for Paytas, instead posting videos that mocked or celebrated her alleged death.

At least one person seemed unclear who, exactly, was rumored to be dead, and instead memorialized Rebel Wilson in a sarcastic tweet.

Some were simply amused by Twitter’s obvious exasperation over the nonsensical hashtag.

“Whoever Twitter hires to write the descriptions for trends is having a real one today,” @IzzyGayeDrag wrote.

Paytas acknowledged the hoax on Monday night and confirmed that she had not gone anywhere.