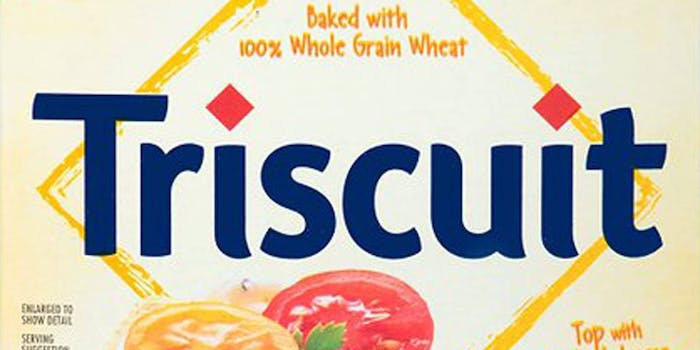 Triscuit crackers have been a staple in pantries for ages, and you’d be hard-pressed to find a grocery store cracker aisle without the brightly-colored yellow boxes. Made of just whole grain wheat, oil, and salt, traditional Triscuits are perfect for topping with cheese, vegetables, smoked fish, meats, or anything else your imagination can come up with.

But why the name? Many people reasonably assume that “Triscuit” is a play on the word “biscuit” reflecting those three basic ingredients. But those people would be wrong. So wrong.

New York City-based writer Sage Boggs recently revealed on Twitter how a social gathering led him to go down a Triscuit-shaped rabbit-hole. And, as a result, his life has been indelibly altered. (I mean, probably! Wouldn’t yours be?)

“OK, buckle up. I wanna talk to you about Triscuit,” Boggs tweeted on Wednesday.

Boggs went on to relay how he, too, had incorrectly assumed what the “tri” in Triscuit stood for, and that a Google inquiry had turned up nothing. As did an email to Nabisco, which was hardly forthcoming with an answer to the mystery.

But finally, his internet sleuthing paid off.

Had Boggs checked the Triscuit Wikipedia page (that literally links to a How Stuff Works article saying as much) he may have found his answer quicker. But who are we to rob a man of his achievement?! Especially when Big Triscuit even gave him a high five during his victory lap.

Blame it on the coronavirus quarantine if you want, but many people—such as Patton Oswalt, Seth Meyers, and other comedians and authors—could not get enough of the Triscuit origin story.

One person even accused Boggs of being a Triscuit undercover agent:

And then @ArtDecider weighed in because obviously, this is high art if we’ve ever seen it:

One day, we’ll all tell our grandchildren about the big scary virus, and how we had to amuse ourselves with fun facts such as how Triscuit crackers got their name. If the future even holds things like “grandchildren” and “Triscuits,” anyway. Who even knows anymore!