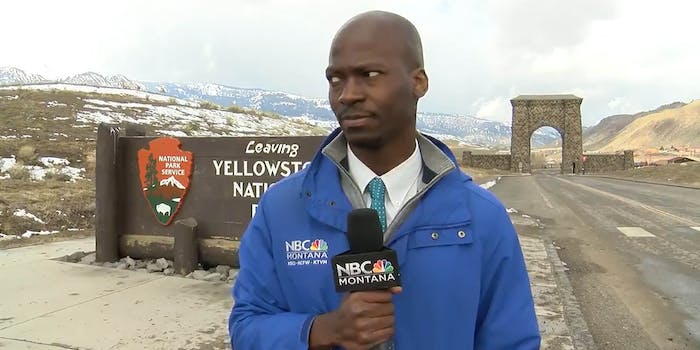 As the number of reported coronavirus cases in the United States continues to rise, Americans are encouraged to practice social distancing in order to mitigate the spread of the virus. Social distancing typically applies to humans, but it’s not limited to them, as one wary broadcast reporter recently demonstrated.

Yesterday, NBC Montana reporter Deion Broxton tweeted footage of himself reporting from Yellowstone National Park in which he becomes aware of a herd of bison in the distance. Broxton’s gaze darts between the herd and the camera for just two seconds before he makes a decision to get the hell out of there.

“Oh my God, oh my God. Oh no, I ain’t messing with you,” Broxton says as he exits the shot and packs his still-filming camera in his trunk.

Twitter users apparently approved Broxton’s decision, as his clip has earned 262,000 likes, 53,000 retweets, and 6 million views since he uploaded it yesterday afternoon. (That’s likely way more than a standard broadcast would have earned.) People applauded Broxton’s instincts and respect for wild animals, and some confessed they would have reacted the same way in a variety of social contexts. Of course, it didn’t take long for somebody to turn his reaction into a GIF.

The reporter even earned the approval of Yellowstone’s official Twitter account for following the first step of the Yellowstone Pledge: “Give wildlife room, use a zoom.”

Broxton also uploaded footage of the bison, which he later shot from a safe distance. It’s hard to tell whether he was in immediate danger, as they seem unfazed by his presence.

Then again, who among us would take the chance?