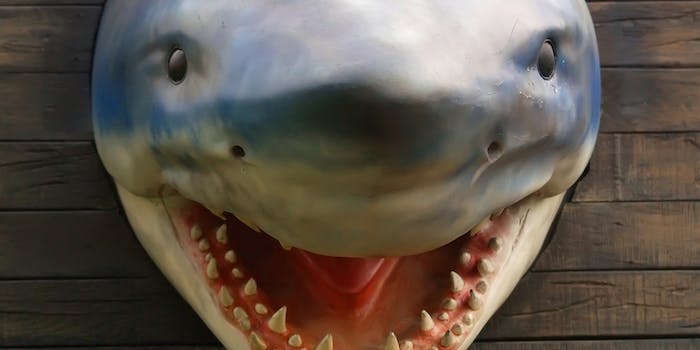 Is there anywhere sharks can't kill you?

What with the Internet-aided viral “success” of the schlocky made-for-basic-cable movie Sharknado, about “a waterspout that lifts sharks out of the ocean and deposits them in Los Angeles,” with a sequel already on the way, it’s only natural that movie producers would continue putting killer sharks in surprising environments. In fact, they’ve been doing it for years: Sand Shark is a notable example, about a rare species that can “swim through sand like water.”

That exact line—just swap out “sand” for “snow”—appears in the latest amazingly bad shark movie trailer, for a crummily CGI’d flick called Avalanche Sharks, which was bought up by SyFy, the same channel that gave us Sharknado. The story here is that a bunch of sexy teens are enjoying spring break at a ski resort (yeah, we don’t know either), only to be unpleasantly surprised by some ancient, carnivorous, snow-dwelling fish whose dorsal fins cut easily through that grade-A powder. The body count in the preview alone makes this worth your while to watch:

But wait a minute: sharks that swim through snow, an ancient legend come to feast on skeptical humans, pure white snow stained red with blood … it all begins to seem remarkably familiar, don’t you think? Almost as if, in the pantheon of terrible shark thrillers, someone has had this exact idea already, if not a comparable budget. Oh, of course! I’m thinking of Snow Sharks.

Guess it’s true what they say: Every story has already been told. For a second I thought I was onto something with a “sharks in space” concept, but alas, that too has been done: