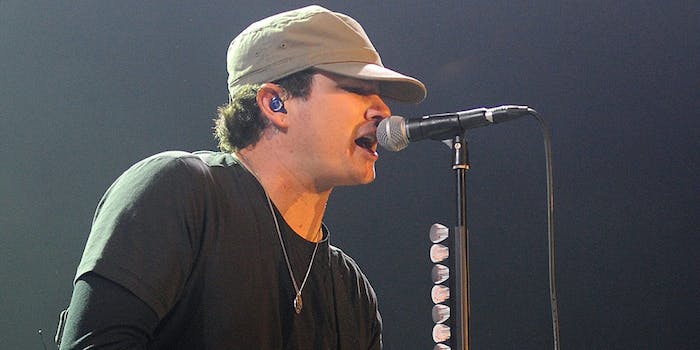 Maybe we should start taking Tom DeLonge seriously about UFOs

The U.S. Navy just legitimized him even further.

Maybe Tom DeLonge had a point after all.

The former Blink-182 guitarist and singer who’s morphed into perhaps the most famous alien conspiracy theorist/enthusiast had some of his credentials legitimized when a Navy spokesperson said that three videos posted to DeLonge’s UFO research website showed “unidentified aerial phenomena” this week.

“The Navy considers the phenomena contained/depicted in these videos as unidentified,” spokesperson Joseph Gradisher told the Black Vault website.

Three videos were posted to DeLonge’s organization To the Stars Academy of Arts and Sciences (TTSA) and the New York Times in late 2017 and early 2018. Though DeLonge’s organization said the U.S. government had declassified the videos so the public could see them, a Pentagon spokesperson told the Black Vault earlier this year that wasn’t the case. “The videos were never officially released to the general public by the [Department of Defense] and should still be withheld,” the spokesperson said.

One video showed footage from 2004 when pilots in an F/A-18 Super Hornet off the coast of San Diego encountered an oblong flying object without wings or a tail that they couldn’t explain.

As NBC Chicago noted, “The footage shows the moment a U.S. Navy F/A-18 Super Hornet crew spots the aircraft with an onboard forward-looking infrared system. Flying around 300 mph at 25,000 feet, the Super Hornet crew at first has trouble locking their sensor on the aircraft as it flies at low altitude above the ocean. Once they are able to track it, cockpit audio reveals just how excited, and curious, the crew was about the find.”

According to the TTSA, the object was “hovering without a propulsion exhaust plume” and had “extreme maneuverability and startling changes in acceleration.”

Wrote the TTSA: “It is because we cannot replicate these flight characteristics with existing technology, we believe this is indicative of beyond next generation technologies and necessitates further research.”

In another video released by the TTSA, pilots are recorded marveling at what they’re seeing.

Gradisher would not say what the videos might have shown, commenting that “The Navy has not publicly released characterizations or descriptions, nor released any hypothesis or conclusions, in regard to the objects contained in the referenced videos.”

DeLonge left Blink-182 in 2015, and since then, he’s focused much of his attention on outer space and what other life it might hold. He was named the UFO researcher of the year in 2017, and he’s not treating it as some kind of joke.

“People will be like ‘Oh, you believe in UFOs,’ but I’m reading books on physics, I’m reading books on the secret space program, I’m talking to people that work underground for six months at a time, that are confiding in me about the national security initiatives,” DeLonge told Paper in 2015. “I’ve literally read 200 books on the subject, and I don’t spend my time looking at UFO reports or talking to little green men.”

Now, the U.S. Navy has legitimized him even more—even if it’s not exactly happy the footage came out in the first place.