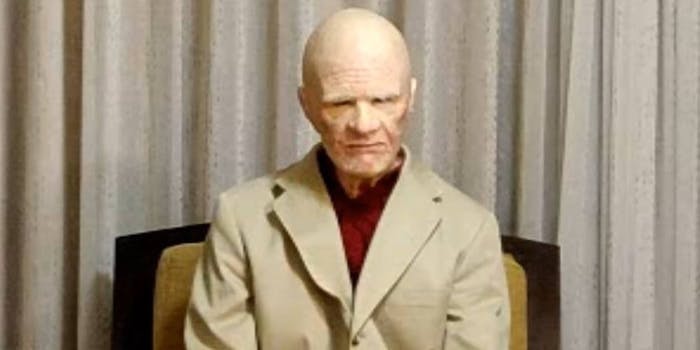 ApexTV is back with more impossible-to-believe tales.

Despite the recent controversy over the ApexTV YouTube’s channel most popular recurring character, another supposed YouTube time traveler is claiming that he traveled to the year 2300 where floating cities levitate a mile off the ground and where society is governed by a powerful computer.

The man says his name is Gerald Gardner and that he’s traveled back in time nearly 300 years to tell us his story. Yet, Gardner shows no proof and like all of the supposed time travelers featured on ApexTV, his tale is impossible for most people to believe. But that hasn’t stopped the channel from compelling more than 1.1 million people to subscribe.

Recently, there was hot drama on the channel when two people claimed to be playing the role of ApexTV’s most well-known character, Noah. One 16-year-old named Denis Bel said he had taken on the Noah persona after ApexTV approached him when he was 14 and offered him money to make a fake time travel video. In response, ApexTV published a video in which it claimed that a man named Jason was the true Noah and that he had been the one to approach the channel.

As for Gardner, who plays the role of an old man with an English accent, he said he began working for the British government in 1977, and by 1988, he was tapped to work on an experimental technology that would send a human being into the future and bring them back successfully.

“If they could do this, they would have great power over our society, and they knew they must perfect this technology before any other country does,” Gardner told Apex TV.

Gardner, who said he was given a sum of £2.3 million for his journey, said he was then sent to the year 2300, where Los Angeles is underwater and the only threats of potential war come from outer space.

Gardner said his time traveler machine was a “large spheroid object” about 30 feet in diameter. Once inside the machine, he said he began to lose consciousness. He initially thought he had died and said, “I didn’t feel like anything at all.” But when he woke up, he said he was in a large city with buildings that were thousands of feet in the air. He saw floating cities because by the 24th century, “anti-gravity techniques have been perfected to the degree that they can levitate an entire city” about 6,000 feet off the ground. (The benefit of levitating cities apparently is so they can be moved from place to place and that they contain much less pollution than the cities that were anchored to the ground.)

In the year 2300, Gardner said that cities were governed by a powerful computer (this is a common talking point among the so-called YouTube time travelers). It’s a civilization without laws but only guidelines for people to follow. If the computer deemed a potential offender of a guideline to be guilty, they would be sent temporarily to a work camp. If the breaking of the norm was so severe that the computer deemed them unable to be reintegrated into society, Gardner said the offender’s consciousness would be uploaded to a computer, and they would live out the rest of their lives in some kind of virtual state of being.

There is no money or banks, and with no war in the future, Gardner makes it seem like a pretty nice place to live. After three years of living in the 24th century, Gardner said he was sent home though “I would have stayed longer if I could.” Then he began to cry.

Gardner said he had artifacts from the 24th century, but he said he would reveal them in a second video. So, for those who are inclined not to believe these supposed time travelers, you’re going to have to wait longer for proof of Gardner’s tale.

ApexTV is clearly doing this for entertainment purposes but hasn’t yet broken its facade and maintains that it’s a legitimate news channel on YouTube. Its virality may be disingenuous because of how it frames its tall tales as real news, but its millions of views certainly aren’t.