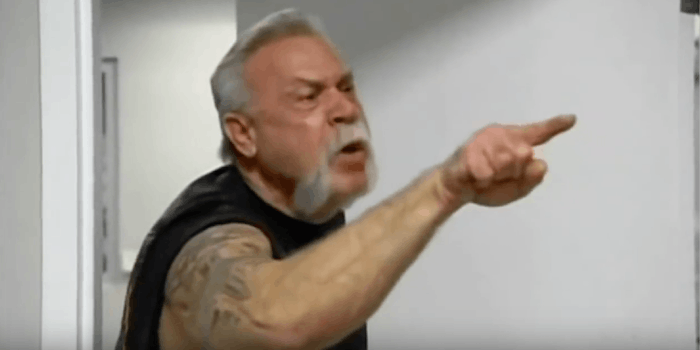 What are Jr. and Sr. fighting about?

Most internet memes become popular before dying of overexposure. But there are exceptions. Sometimes a meme that wasn’t fully appreciated in its time will reappear years later, finally finding the spotlight it deserved. That’s what’s happening this week with a father-son argument scene from the reality TV show American Chopper.

American Chopper, a show about the conflict between a father and son who customize and sell motorcycles, went off the air in 2010, but this single scene has been immortalized in meme form:

In the original clip from the show, Paul Teutul Sr. is pissed at Paul Teutul Jr. for showing up to work late and leaving early. Jr. feels his contribution to the shop is underappreciated. Chair-throwing and general property destruction ensue.

In the memes, which started as far back as 2013, things are generally a bit more wholesome and heartwarming. Take a look at this classic example:

We’re looking at a truly vintage meme here, folks. It’s at least five years old, and it’s miraculously active again in 2018. Here are some present-day American Chopper memes that seem to have sparked the revival:

The argument can be about anything, but the further it is from something that two ego-driven motorcycle men would actually fight about, the funnier it gets. For example, this one has Jr. and Sr. hurling different critical takes on Garfield:

And this one has them debating the events of the Star Wars prequels:

It’s an elaborate meme to participate in—you have to write five panels of dialogue instead of just one clever caption—which may explain why it didn’t catch on years ago. Meme teens’ lack of familiarity with American Chopper may also have hurt back then, but it’s not really hurting now. Knowing who the characters are hardly matters; for the purpose of this meme, they could be any macho-looking father and son having a heated dispute.

Reality TV—from the Kardashians to Pawn Stars to RuPaul’s Drag Race—has always been a rich source of memes, but some of the most popular shows have already been strip-mined for their best comedic moments. Turning back to the clock to find a deep cut like American Chopper looks like a shrewd move in today’s competitive meme market.

Or is it completely dumb, a joke no one will get?  I’m sure you could have a nice five-panel, chair-throwing argument about it.