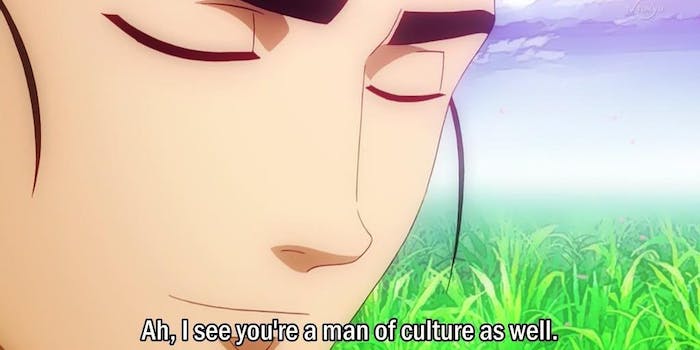 Screengrab via Arakawa Under the Bridge/Shaft, Inc.

It's a meme that twisted culture into something sick and disturbing.

In the 21st century, the pretentious designation “a man of culture” is rarely used without irony. Who would give himself such a lofty title? But that’s what makes the latest popular meme, “I see you’re a man of culture” so damn funny.

The meme uses a screengrab of Last Samurai, the samurai barber from the 2010 anime Arakawa Under the Bridge. He meets someone who favors the traditional topknot hairstyle and says “Ah, I see you’re a man of culture as well.”

That sincerity is completely missing from the meme, though, especially the variations that dominated Reddit‘s r/dankmemes in early 2017. At its best, the dank memes subreddit is a fertile incubator of original content. At its worst, it devolves into a watered-down version of 4chan culture, going so deep on “ironic” jokes about Nazism, pedophilia, school shootings, and suicidal thoughts that it threatens to come out the other side and straightforwardly glorify these things.

So, what does a “man of culture?” on r/dankmemes claim to be into? The joke is that it’s some of the worst stuff you can think of. School massacre jokes have been big there lately, and this meme is no exception:

And here’s the inevitable pedophilia version:

Not every Man of Culture meme needs to be edgy, though. There’s the very straightforward anti-meme version:

And the nerdy version about mechanical keyboards:

But the best Man of Culture memes are the ones that delete words from the caption, totally changing the joke—of course, some of them are on the edgy side too:

There’s only so much mileage you can get out of that angle—”ah” is about the most minimal version possible—but the meme itself is virtually infinite. Practically everything in the world can either be considered good taste or bad taste, and both of them work here.

On the other hand, it could just be co-opted by the alt-right, the white nationalist movement that has a lot of overlap with 4chan, and never reach its full potential.

Ah well, they can’t all be winners.