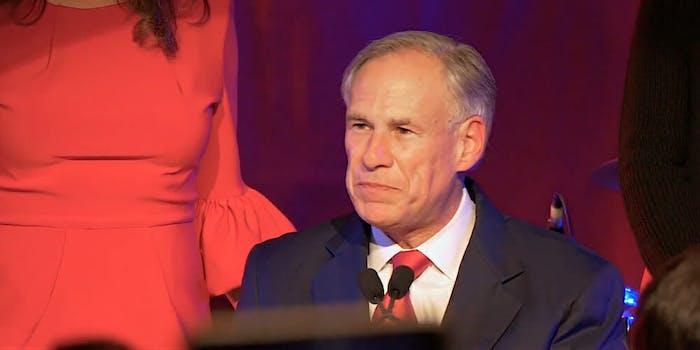 The photo depicts a man in his underwear taking a NSFW photo.

Texas Gov. Greg Abbott on Monday tweeted a bizarre stock photo to promote a bill that he said would criminalize online sexual harassment. The now-deleted photo depicted a man in his underwear grinning with glee as he takes a NSFW photo.

“Sexual harassment on social media is out of control. Here’s an idea to rein it in. State Representative @MorganMeyerTX Files Legislation To Criminalize Digital Sexual Harassment,” Abbott tweeted along with the photo.

In promoting a bill tackling a legitimate policy issue, the governor of Texas highlights an…unfortunate photo to his 240,000+ followers https://t.co/HUm9ZqbTL9 pic.twitter.com/fiuBUBFVde

Many were quick to call attention to the lawmaker’s social media activity.

There were plenty more reactions ranging from mockery to disgust.

The Dallas Observer has dubbed Abbott’s Twitter “President Donald Trump Lite.” The social media account has been home to political memes and, once, a fake Winston Churchill quote.

Abbott’s office did not immediately respond to the Daily Dot’s request for comment.