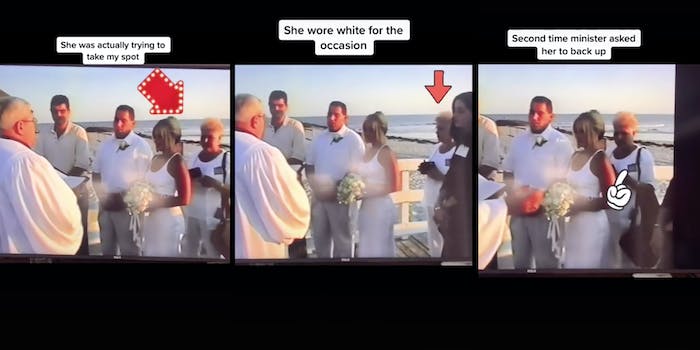 This marriage was doomed from the start.

TikTok is home to all kinds of “monsters-in-law“, but few can match the intrusive mother-in-law featured in a recent viral video.

TikToker @hey_heypaula (who goes simply by Paula on the app) uploaded the video of her (former) mother-in-law earlier this week. In five days, it’s racked up more than 2.1 million views.

Paula’s account is full of videos that show her ex-MIL behaving horribly, but none can match her wedding day.

In the video, Paula reveals that her mother-in-law wore white to her wedding, a major no-no. But even that paled in comparison to when she attempted to take Paula’s place at the altar.

Paula’s video includes footage of a lovely beach wedding, where she stands at the altar in an elegant white dress, next to her now-ex-husband. Behind her, her mother-in-law looms like the “grim reaper.” Draped from head to toe in white, she stands close enough to reach out and touch the couple.

As the video continues, Paula’s former mother-in-law shifts behind the couple, moving close enough that the minister has to ask her to back away–twice.

In the comments, viewers were torn between dragging Paula’s former mother-in-law and dragging her ex-husband, who didn’t seem at all concerned by his mother’s invasiveness. Another one of Paula’s videos shows the reason for this: He’s the one who invited her to stand there.

The marriage appears to have been doomed from the get-go, which Paula confirms in several other juicy TikToks. She’s shared stories about her ex’s mother being baffled by Paula’s Portuguese heritage during their first meeting, the time her mother-in-law tried to walk out of the house with Paula’s newborn, and the blatant racism her ex-MIL commonly spouted.

It’s been years since Paula’s had to put up with her ex-mother-in-law, but the memories are clearly still vivid. But several recent videos show Paula finding love after her divorce from Mama’s Boy of the Year, and she seems much happier these days.