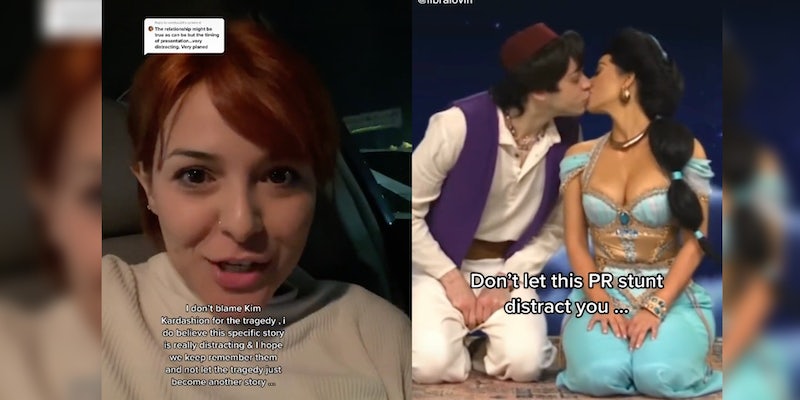 A TikToker is calling out Hollywood’s current unexpected “it couple”—Kim Kardashian and Pete Davidson—for pulling attention from the Astroworld tragedy that left nearly a dozen young people dead.

Ten people, between the ages of nine and 27, died and hundreds more were injured at Travis Scott’s festival. Officials said the unexpected tragedy was due to a crowd surge, but it’s still unclear what caused the concertgoers to move forward.

The New York Times reported the Astroworld concert as one of the “deadliest crowd-control disasters at a concert in the United States in many years.” Another recent crowd disaster was in 1979 when a crush outside the doors of The Who’s Cincinnati show left 11 people dead.

TikToker @libralovin posted two videos about the whole affair. The first shows a fifteen-second clip that starts with Kim and Pete dressed as Princess Jasmine and Aladdin on Saturday Night Live, kissing on the magic carpet. That segment is followed by pictures of each of the Astroworld victims with the words, “They need to be remembered.”

“Don’t let this PR stunt distract you,” @libralovin said in the video.

In the caption, she added that “Kris Jenner is pushing this relationship on us.” The TikTok has been viewed more than 2.5 million times since Saturday.

In a follow-up, the TikToker clarified that she doesn’t blame Kardashian, her family, or Davidson for the tragedy. However, she said if Kardashian and Davidson are in a real relationship, “this specific story is really distracting and I hope we keep [remembering Astroworld victims] and not let the tragedy just become another story.”

@libralovin pointed out that Scott and Kylie Jenner are having a baby together, alluding that the new couple is aware the negative attention from Astroworld could potentially blow back on the Kardashian-Jenner family.

The TikToker referred to the relationship as “so random” and speculated that the Kardashian-Jenner family know, “there’s always gonna be another story that’s gonna outshine and distract what happened.”

“I just don’t want people to forget, whether it was on purpose or not, just don’t forget the victims,” she said admitting that she herself has gotten invested in the drama of celebrity relationships.

People in the comments were split about whether the relationship is meant to be a distraction versus saying it’s completely separate from the Astroworld tragedy.

“They were hanging out before Astroworld even happened? Y’all seriously need to stop,” Jus said.

“IDK why there’s an obsession with blaming the Kardashians for everything, blame Travis and his team for what happened,” Alo added.

“No fr it’s so weird how everyone literally forgot. And how the [Kardashian] family doesn’t care at all about them,” K countered.

“And right before the holidays. Really breaks my heart for the families,” Soledad said.

The Daily Dot reached out to @libralovin via TikTok comment.