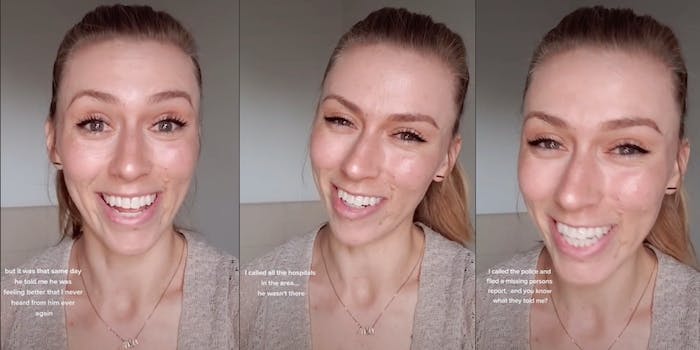 Viewers are urging her to 'post his pictures as a missing person.'

Anyone who’s been on TikTok for more than a minute has seen at least one storytelling trend. One of the latest trends asks people to share the worst way they’ve been ghosted, and this story from user @kathrynverb might top them all.

@kathrynverb, who simply goes by Kathryn on the platform, answered the ghosting trend with a showstopping story. Her video has earned 2.6 million views at the time of this writing—far more than her typical uploads—and nearly 400,000 likes, with comments continuing to pour in by the thousands.

“This sound was made for me,” Kathryn says before diving into her bonkers breakup story.

Kathryn had been with her man for two years before the fateful ghosting happened. She was ready to settle down with this man, “marry him, have his babies,” the whole shebang.

Then, after the coronavirus pandemic struck, her beau told her he may have caught the virus. After nearly visiting the hospital over his symptoms, he told Kathryn he was starting to feel better.

This turned out to be the last thing he ever told her.

Over the next week, Kathryn says he “suddenly stopped responding to all my calls, all my texts.” Then, a week later, “his phone went right to voicemail.”

Kathryn, fearing the worst, thought her man had caught a bad case of COVID-19 and panicked. She started calling all the local hospitals. When that didn’t yield anything, she called the police and filed a missing persons report.

Here’s where the story really gets good.

“You know what they told me?” Kathryn says. “They told me my boyfriend did not exist. So not only did my boyfriend ghost me by faking his own death, he also had lied to me for two years about his real identity.”

Let’s review for the people in the back. Not only did Kathryn’s boyfriend of two years stage an elaborate ghosting plot to make it seem like he had died, but he had been using a fake identity the entire time.

Nearly everyone in the comments drew the same conclusion about why Kathryn’s boyfriend suddenly ghosted her: He was married. People noted that he had probably been using work to cover for his cheating, an option that he lost when stay-at-home orders were instated. Left without an alibi, he took the easiest possible out—dip and hope no one notices.

Other gobsmacked viewers asked how Kathryn had never glimpsed her man’s driver’s license or credit card in two years of dating. Online sleuths took the story as a challenge to track down the mysterious man and out him to his family.

While Kathryn appreciated the effort from her viewers, she told them in a comment that she did eventually learn her former beau’s true identity, but she’s not ready to share it yet.

One user offered Kathryn some words of encouragement: “So he lied about his name, but you need to stay positive. Maybe he did die.”