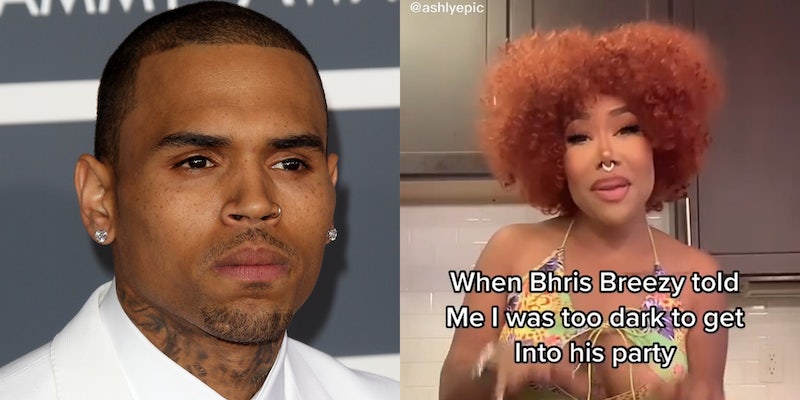 This is not the first time Chris Brown has been accused of colorism.

A viral TikTok video shows a woman accusing oft-embattled Chris Brown of colorism. She says he told her she was “too dark” to get into his party.

“Idk why I still like him … I must like abuse,” @ashlyepi wrote in the caption of the video.

The text overlay on the video claims that the popular TikToker, who has nearly 200,000 followers, was banned from the infamous singer’s party because of her skin color. “When Bhris Breezy told me I was too dark to get into his party,” it reads.

The woman is dancing to Miguel’s “How Many Drinks?” and lip-syncing the lyrics “Baby, it’s alright” in the clip. In the comments, she later wrote: “Guys, I’m a real victim; my caption is basically my coping mechanism.”

The alleged incident isn’t the first, or even second, time Brown has been accused of colorism. He also received flak for dog-whistling lyrics in “Need A Stack.”

“Only wanna f*ck the black b*tches with the nice hair,” the lyrics go.

And in 2019, Love & Hip Hop: Atlanta star Tokyo Vanity accused Brown of colorism, suggesting his security guards kept dark-skinned women away from specific areas in a trendy Los Angeles club at his behest.

He was accused of colorism earlier this year, in May, at his birthday party. It’s unclear if this is the same incident @ashlyepi is referring to.

The Daily Dot reached out to the TikToker for additional information.