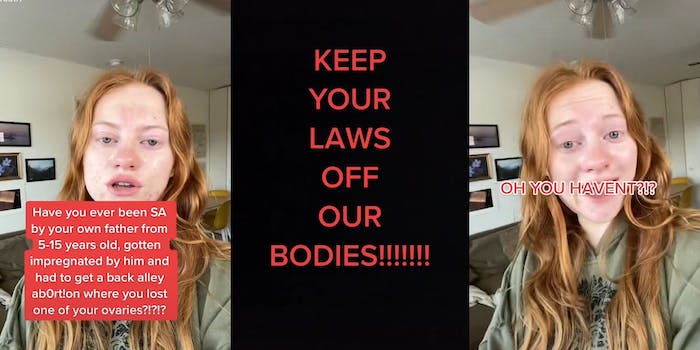 ‘Keep your laws off my body’: Women are using a trend on TikTok to discuss the sexual trauma that caused them to consider abortion

The U.N. Women report shared that only 3% of 18 to 24-year-olds reported that they have never been sexually assaulted.

People are using a trend on TikTok to discuss the sexual trauma that caused them or their relatives to turn to or consider abortion.

The trend comes in the wake of a leaked Supreme Court draft that would overturn Roe V. Wade, the landmark ruling that legalized abortion nationwide in 1973. The draft has prompted a slew of protests across the nation and outcry across social media.

On TikTok, users are using the song “Vent” by rapper Baby Keem to share various reasons why they believe Roe V. Wade should not be overturned.

The TikTok sound has more than 12,000 videos, with the majority of recent ones discussing abortion and the Roe V. Wade news.

“Have you ever been [sexually assaulted] by your father from 5-15 years old, gotten impregnated by him and had to get a back alley abortion where you lost one of your ovaries?!?!?” one TikToker (@pres1.1) asks in a video.

@pres1.1 DISCLAIMER! Didn’t happen to me, happened to my grandmother. My heart shattered when I found out #SearchForWonderMom #protectwomensrights #prochoice #generationaltrauma ♬ vent – Baby Keem

The user clarified in her video’s caption that the experience was her grandmother’s, and was one od the reasons she wouldn’t stop advocating for abortion rights.

Another TikToker (@totallyheather90) used the same trend to ask, “Have you ever been roofied to wake up and find out the whole baseball team took turns on you while you were blacked out?”

“I told my boyfriend I wanted to wait until marriage, but instead he held the camera during the abuse. I’m lucky the morning after pill worked,” the user wrote in the video’s caption.

@totallyheather90 I told my boyfriend I wanted to wait until marriage, but instead he held the camera during the abuse. I’m lucky the morning after pill worked. #keepsupporting #keepyourlawsoffmybody #feminist #prochoicewithheart #womenpower #prochoiceisprowomen #independent ♬ vent – Baby Keem

TikTok user @b0ngripsbeforeschool shared a video asking, “Have you ever been raped by a group of strangers while crying and screaming no and get finished in?” Multiple used the trend to ask if you’ve ever had a man ejaculate inside you without consent.

“Have you ever had to tell your mother that you became part of the 97%?” TikToker @lindsswrld asked in their video.

“The 97 percent” trend refers to the 97% of women who have been sexually assaulted, according to data from U.N. women. The statistic has been widely circulating on social media during the aftermath of the Supreme Court draft.

The U.N. Women report, which surveyed more than 1 billion people online, shared that only 3% of 18 to 24-year-olds reported that they have never been sexually assaulted.

In the U.S., about one out of every six women has been the victim of an attempted or completed rape, according to the Rape, Abuse and Incest National Network. About 433,648 Americans 12 and older are sexually assaulted or raped each year, according to RAINN.

Rape is often cited as a prevalent reason to keep abortion legal. The Supreme Court decision, if finalized, would allow each state to decide whether to restrict or ban abortion. Many states, especially in the South, already have trigger laws that explicitly note that they would outlaw abortion completely if the Supreme Court allowed it, according to reporting by the New York Times. These states, including Texas, would likely not allow an exception to the outlaw in instances of rape or incest.

In countries that restrict abortion, the percentage of unintended pregnancies ending in abortion has increased during the past 30 years — from 36% in 1990–1994 to 50% in 2015–2019, according to the Guttmacher Institute.

The Daily Dot reached out to TikTok users @pres1.1, @totallyheather90, @b0ngripsbeforeschool, and @lindsswrld via TikTok comments.