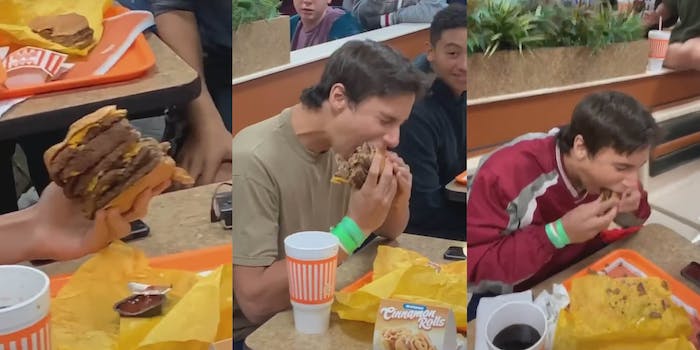 The viral TikTok is a pretty solid piece of filmmaking.

The Texas burger chain got a Whatabump this week after teen Ethan Mueller was filmed consuming a 10-patty burger in Allen, Texas. In the now-viral TikTok, a receipt, dated Oct. 16, shows the meat tally and acquaintance Blake Reynolds captured the journey, which includes masterful closeups of onlookers, cheers from staff, and a frenzied conclusion.

Reynolds told USA Today that they were trying to “beat a record,” though a spokesperson did not confirm that they had. Still, it’s a feat of modern filmmaking: A hero’s journey through regional consumerism, edited to achieve maximum tension. It was made to be memed.

Fan art of Mueller and the guy who wipes his mouth has been produced.

Reynolds told Mashable that the gathering was part of a youth group trip, which makes this even more thrilling.