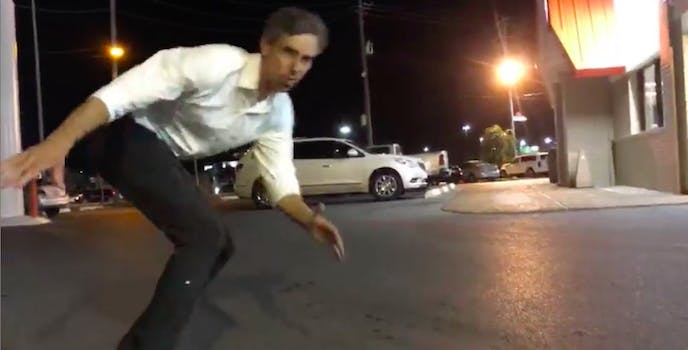 Rep. Beto O’Rourke (D-Texas) is currently running against one of the least popular and most uncool members of the U.S. Senate, Ted Cruz.

So pretty much anything O’Rourke does on the campaign trail will be infinitely cooler than Cruz and be praised by the internet as #epic.

Like gently cruising around a Whataburger parking lot in Texas on a skateboard while saying “woosh.”

(The cruising is at the beginning of the 37-minute video above.)

.@BetoORourke and his team just ordered triple meat Whataburgers after he skated around the parking lot. https://t.co/31jqHyqF8J pic.twitter.com/SIwRZAgupK

Ted Cruz, not to be outmanuevered, shall release video of himself BMXing in the parking lot of WhatAboutBurger ending badly as he runs into the back of a truck

Some races are won by the candidate with heart and soul. Beto's got both. https://t.co/e1r79BAUlE

The slogan for this entire campaign should be "Ted Cruz could never" https://t.co/WM0rKQneX9

It also got the early 2000s punk treatment.

i thought that video of beto o'rourke skateboarding in the whataburger parking lot required a little splash from the queen of pop-punk so hERE YA GO pic.twitter.com/wHg4hgcC2s

At the Whataburger after the skateboard sesh, everyone in O’Rourke’s camp ordered Triple Meat Whataburgers, a reference to a curious dig Cruz recently made at him.

Cruz’s lead over O’Rourke has been tightening in the past few weeks—Cruz’s lead is down to about six points, according to the Real Clear Politics average—and now it looks like O’Rourke might just kickflip his way to the upper chamber and turn the Capitol rotunda upside down (and into a halfpipe).