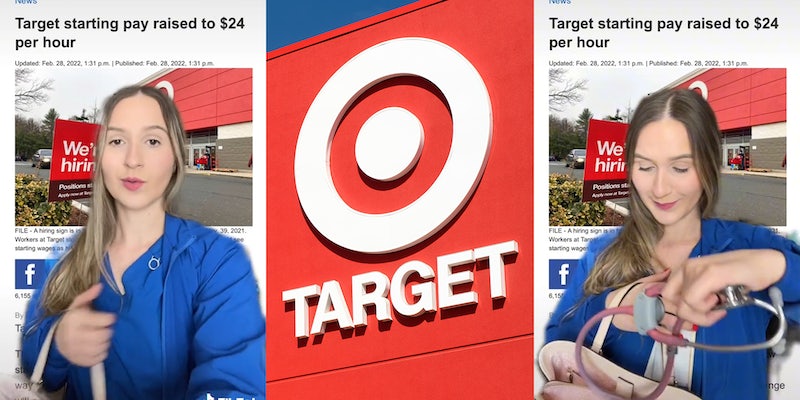 ‘More than what I make.. bye medical field’: Viral TikTok about how Target raised starting wages to as much as $24 an hour sparks debate

This nurse went viral after pointing out that Target pays more than her job.

Some Target stores are raising their hourly starting wage, inspiring a viral response from one TikToker. If Target pays better than being a nurse, then why should she stay in the medical field?

“@target where should I send my resume?” wrote TikToker @thatnurseriley, posing in front of a news article with the headline, “Target starting pay raised to $24.” Lip-syncing along to audio saying “That’ll do it,” she takes off her stethoscope and shoves it into her handbag, pretending to quit her nursing job.

Her TikTok struck a nerve, attracting 2.2 million views in less than a week. People have strong views about minimum wage increases—and some voiced doubts about whether the “$24 per hour at Target” headline is actually accurate.

“me, as a target employee, wondering where my 24 per hour is,” one commenter wrote, accompanied by a laughing emoji. “Up to $24/r only in certain cities and certain positions,” wrote another, adding: “Target also doesn’t guarantee full time hours.”

“As someone who works at target, it’s a PR stunt. Don’t believe a word they say,” another urged.

However some commenters did sympathize with @thatnurseriley, saying that they were also underpaid while working as nurses. “To think I started as an RN on an understaffed med surg floor for less,” wrote one. “More than what I make.. bye medical field,” another commenter agreed.

The headline screencapped in this TikTok comes from a news story on al.com, and the text of the article includes a caveat. Target isn’t increasing everyone’s starting wage to $24. That’s actually the top end of the scale, with starting wages ranging from $15 to $24. And as many of @thatnurseriley’s commenters pointed out, an hourly wage doesn’t mean much if you’re not guaranteed full-time hours. “$24 starting wage” makes for a good headline, but it doesn’t reflect the reality of working retail.

The Daily Dot reached out to @thatnurseriley via TikTok comment and Target’s press department via email.