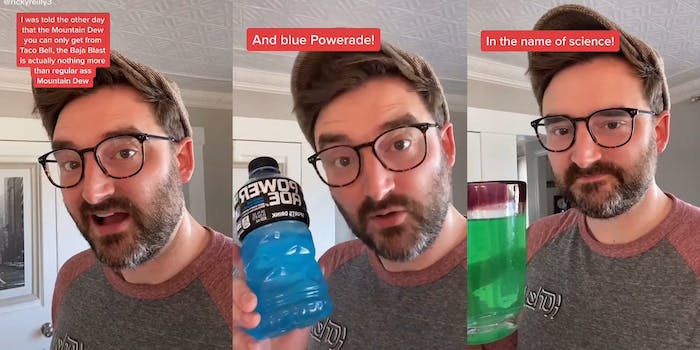 ‘We might have cracked the code here’: TikToker shares DIY Taco Bell recipe

Not everybody is sold on the fast food hack.

A TikToker has gone viral for claiming to have discovered a DIY recipe for Taco Bell’s Mountain Dew Baja Blast—but not everybody is sold on the final product.

TikTok is a breeding ground for fast food hacks and exposés, with users constantly trying to glean culinary secrets from their favorite restaurants or reveal their unsavory business practices. Ricky Reilly (@rickyreilly3) opted for the former, and his Baja Blast home remedy has earned more than 1.8 million views since he uploaded it last Sunday.

The allure—or perhaps the scandal—of Reilly’s DIY Baja Blast recipe lies in its simplicity. “I was told the other day that the Mountain Dew that you can only get from Taco Bell, the Baja Blast, is actually nothing more than regular-ass Mountain Dew and blue Powerade,” he says. “Let’s put this shit to the test.”

Reilly fills half a glass with Mountain Dew, then adds blue Powerade until the color roughly matches that of an in-store Baja Blast. He sips his concoction “in the name of science,” then looks at the camera with surprised satisfaction.

“I’m no Dewologist, but I think we might have cracked the code here,” he says.

Not all viewers were convinced.

“Since powerade is a coke product and mt. dew is Pepsi the answer is no,” @demolition_redneck commented. Indeed, PepsiCo purchased Taco Bell in 1978, and the company only serves Pepsi products.

Other people thought Reilly’s ratio was off, or that his tonic was missing an ingredient.

Numerous viewers were also confused by Reilly’s assertion that you can only find Baja Blast at Taco Bell, claiming that the beverage has been available in stores “forever.” Reilly, however, said he couldn’t find it in his native New Hampshire.

One alleged Pepsi insider appeared to come to the rescue in the comment section.

“Bro actually I work for Pepsi and it’s not those two here in NH btw it’s Mountain Dew and voltage mixed together,” @definitelynotthatguy wrote. “And we will start selling it in May-august in bottles.”