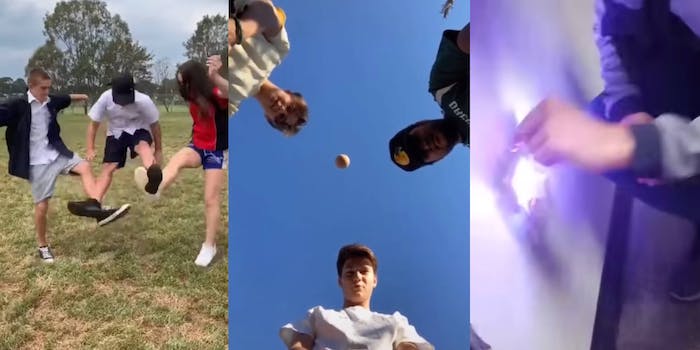 Don't try these at home.

The internet is home to many dangerous—even deadly—viral challenges and has been for decades. So it’s no surprise that people have also posted attempts at dangerous challenges on TikTok, the massively popular video-sharing platform of the moment.

Long before the internet became our collective obsession, people were attempting stupid stunts for clout. Then the ability to record and share video made these silly efforts more popular, as we were able to witness the stupidity of our peers and, sometimes, copy them. As sites like YouTube, TikTok, and Snapchat rose, the viral challenge became our way to indulge our most idiotic urges.

Nowadays, a new viral challenge seemingly crops up every week. Some of them, like the “Old Town Road” challenge or the “DNA test” challenge, are relatively benign. Others, like the “fire” challenge or “outlet” challenge, pose a legitimate risk. These hazardous viral sensations are enticing to more and more young people, who often don’t realize how truly dangerous they can be.

The most dangerous TikTok challenges

Despite the serious injuries some people have sustained while attempting them, many of these challenges stay viral for weeks. Young people, often trying to gain clout, continue attempting to tackle them on camera. Oftentimes, this merely leads to them becoming the challenge’s next victim. As new perilous challenges crop up, the list of trends—including old ones that are sometimes still attempted—keeps getting longer, as does the list of sites that people share the videos on.

In no particular order, these are the most dangerous challenges we’ve seen on TikTok (and elsewhere) so far. Obviously, don’t try these at home.

Anything that involves choking a friend—or yourself—into near-unconsciousness is, unsurprisingly, ill-advised. Considering this is the very idea behind the choking challenge, it’s safe to say that anyone and everyone should steer clear of this particular trend.

This challenge, in one form or another, has been around for a long time. Teens have been partially strangling themselves for decades, just to feel the brief euphoria that follows that first, desperate gasp of air. The game ebbs and flows in terms of popularity but reached its viral zenith in 2017. Since then, the dangerous challenge has cropped up on various social media platforms, including TikTok. Risks of participating in the choking challenge are pretty much what you’d expect. Do it too long, and participants risk loss of brain cells, permanent brain damage and even death.

Another challenge that can lead to asphyxiation, the condom challenge hasn’t been around nearly as long as the choking game. This dangerous TikTok challenge requires a condom, some water, and at least two willing participants.

Performing the challenge is simple: One person fills the condom with water and drops it over the second person’s head. Thanks to the durability of most condoms, the dropped water “balloon” rarely pops. This means that many people participating in this challenge end up with an airtight seal over their noses and mouths. Bad idea.

You might be wondering why anyone would ever participate in something called the fire challenge. Clearly, you don’t remember being a teenager. Most common among younger users, the fire challenge is exactly as dangerous as it sounds—which has in no way stopped people from attempting it.

Performing the challenge is as simple and foolish as you might assume. Participants douse a portion of their body—usually the chest or hands—with a flammable liquid. Then they light it up and record the effects, which often lead to first- or second-degree burns. Videos of badly burned teenagers are all over the web thanks to this particular viral challenge.

The skullbreaker challenge is another fresh viral craze that, to most, seems completely ridiculous. The challenge has already proven itself immensely dangerous after a Venezuelan teen reportedly ended up in the ICU. Authorities have issued warnings about this particular trend, but that won’t stop some from attempting it.

You need at least three people to perform the skullbreaker challenge. All three stand in a row—in front of the camera, of course—and jump. The two on either side jump first, simultaneously, followed by the person in the center. When the center person’s feet leave the ground, however, their companions knock their feet out from under them. This typically leads to the middle person crashing backward to the ground, often striking their head in the process. It’s in the name, people: You can literally break your skull doing this. So don’t.

One of social media’s newest trends, the outlet challenge is also one of the more dangerous TikTok challenges we’ve seen. This viral sensation can easily result in electrical system damage, fires, and electric shock.

To perform the—extremely inadvisable—outlet challenge, people use a phone charger partially plugged into the wall. Then they touch a penny to the exposed prongs, creating a large spark. The challenge has already caused property damage at a high school in Massachusetts. Thankfully, the teens weren’t injured, but if this challenge keeps up for much longer, someone will doubtless get hurt.

Another dangerous challenge that can lead to severe burns and injury, the hot water challenge has been around for a while. Back in 2017, in fact, an 8-year-old girl died after attempting a version of this trend. The new version, which is just as dangerous, has been cropping up online.

The old version of the challenge involved drinking boiling water through a straw. The revamped challenge more often features participants pouring boiling water on themselves or their friends. Unsurprisingly, it has led to some serious injuries. One teen, whose friend poured boiling water on him while he slept, told Fox 59 that his skin “just fell off my chest.”

Some of these challenges are supremely dangerous. Others are upsettingly disgusting. The snorting challenge has the unfortunate privilege of being both. It involves snorting a foreign object—usually a condom—up your nose and pulling it out of your mouth. *shudder*

This dangerous TikTok challenge, like many others on this list, is nothing new. It has cropped up multiple times over the last few decades, but in the age of doing dumb shit for followers, it has reemerged. When this challenge goes wrong, it can result in infection or damage to the lining of the nasal passage, CBS News reported. In really bad cases, it has the potential for choking, which could cause far more severe issues. Even when nothing goes wrong, it looks painful and extremely uncomfortable, so… why?

Participation in this challenge merely requires that you locate and consume a hot pepper that lands high on the Scoville scale and upload your reaction online. Usually, people select between ghost, cayenne, and habanero peppers. The majority of people manage to walk away from this challenge unscathed, thankfully, but ghost peppers are nothing to mess with. Medical Daily reported in 2016 that a 47-year-old California man was hospitalized after he ate a ghost pepper–pureed hamburger during a local eating contest and ended up continuously vomiting and experiencing an esophageal rupture.

Anytime a person passes out, it has the potential for negative side effects. Teens, however, are all over the trend of forcing themselves to pass out. Rather than partially asphyxiate themselves—like in the choking challenge—this dangerous TikTok challenge just involves swaying your head repeatedly from side to side.

Based on the TikTok attempts at the challenge, it seems to work. Unfortunately, a number of risks go along with successfully knocking yourself out—including simply falling and injuring yourself.

Doesn’t this just sound like a great idea? The concussion challenge, also referred to as the “how to get a concussion” challenge, has been making the rounds on TikTok for several months now.

This utterly idiotic TikTok challenge requires a group. All the participants stand in a circle around the camera, which faces upward. Facing down, foolish teens then throw an object—which has ranged from a basketball to tricycles and ladders—into the air above their heads. The “challenge” is to stay put, risking a concussion when the object comes hurtling back to Earth. Why? Just… why?

The honorable mentions of dangerous challenges

These challenges came around before TikTok made its global launch, but that doesn’t make them any less dangerous or worthy of a spot on this list. Absolutely idiotic, sometimes deadly and always painful, the internet is clogged with far too many of these viral challenges.

We’ve likely all heard of the Tide Pod challenge. It swept the nation in early 2018, making headlines across the country. In case you were wondering, consuming soap in any form, no matter how colorful, is not a good idea. Complications from ingesting Tide Pods has led to serious health issues.

The Tide Pod challenge, as far as anyone can tell, started with a joke. Memes and jests about Tide Pods’ pretty colors and candy-like appeal were around long before people were downing the product itself. Then, people started doing just that. Younger YouTube users, in particular, fell victim to this ill-advised trend. Videos of teens and pre-teens eating laundry detergent packets briefly drenched the web before the pressing dangers of this challenge became common knowledge.

Despite the clear danger, a few of the challenges on this list might seem tempting to try out. The blue whale challenge, which has allegedly been linked to deaths on far too many occasions, is not one of them. The actual number of deaths that can be attributed to this viral trend is questionable—some speculate it’s simply an internet hoax—but its brief time in the spotlight terrified parents nationwide.

Loads of online tutorials outline methods to mimic Kylie Jenner’s enviable look. Usually, this involves contouring and the careful application of makeup. Back in 2015, however, a very different method arose to try to imitate the young model’s full lips.

The Kylie lip challenge skyrocketed to popularity, mostly thanks to how easy it was to pull off. All participants needed was a small jar, cup, or shot glass. Placing the cup over their lips, they then created a vacuum by sucking all of the air out of the space. The intended result was puffy, pouty lips similar to Jenner’s. More commonly, people ended up with bruises and torn skin and risked permanent scarring.

Remember planking? Ah what an innocent, mostly safe internet trend. Since the days of planking, viral challenges have gone from dumb to painful to dangerous and worse. The cinnamon challenge may seem rather tame on the outside, but don’t be fooled.

This challenge first cropped up as early as 2001, but it didn’t reach viral status until 2012. The necessary steps are quite simple. Just eat a spoonful of cinnamon without drinking water. In 60 seconds. All while the camera is running. This challenge lasted a remarkably long time, considering the massive health risks it posed. Participants in the cinnamon challenge were at risk of choking and gagging on the cinnamon in mild cases, and in worse cases inhaling cinnamon could lead to vomiting and scarring of the lungs.

The salt and ice challenge

Thankfully, the salt and ice challenge hasn’t been overly popular since 2012. Still, fresh videos of people trying it out are always cropping up, despite multiple reports condemning the practice.

This challenge involves pouring salt onto moist, bare skin and then pressing an ice cube onto the area. Whoever endures the longest emerges victorious, but rarely unscathed. The resulting chemical reaction can lead to frostbite, first- or second-degree burns, and painful blisters. Warnings against participating in this painful challenge have, unsurprisingly, not made much of a difference.