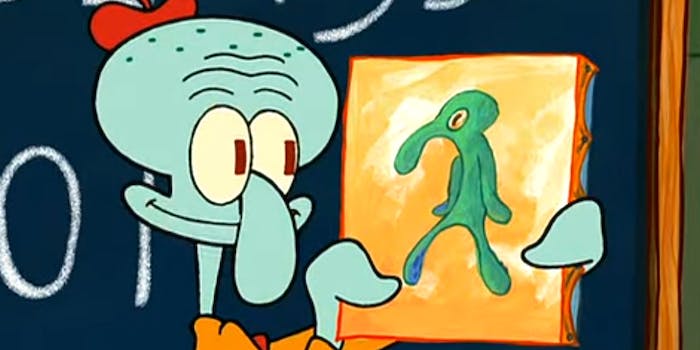 Dude claims his mom paid $250 for this Squidward painting

Another man claims the story is fake.

SpongeBob SquarePants might be the name of the show, but it wouldn’t be the same without Squidward. It would just be a cartoon about a sponge and a starfish happily being idiots together (and occasionally being taken advantage of by a crab).

Without Squidward’s cranky pessimism, SpongeBob’s glee would seem less gleeful and his insanity would seem too sane. Truly, Squidward is the unsung hero of the show.

But that doesn’t mean his self-portrait is worth $250.

“Daniel” says his mom paid $250 for a replica of Squidward’s painting from the episode “Artist Unknown” from the second season of the show.

Although the dude’s mom didn’t get the reference, everyone on Twitter seemed to.

@ShingekiDatAss just place it a little lower and it will be home pic.twitter.com/nMSKNlC2Gz

The painting in question is already quasi-famous online. You can even find tutorials that will help you create your own.

Austin Alexander, a 19-year-old from South Florida, says it’s also a poster you can buy. A poster, he, in fact, did buy. He told the Daily Dot via email that Daniel’s story is fake—the photo is one Alexander posted to his Facebook page in June. 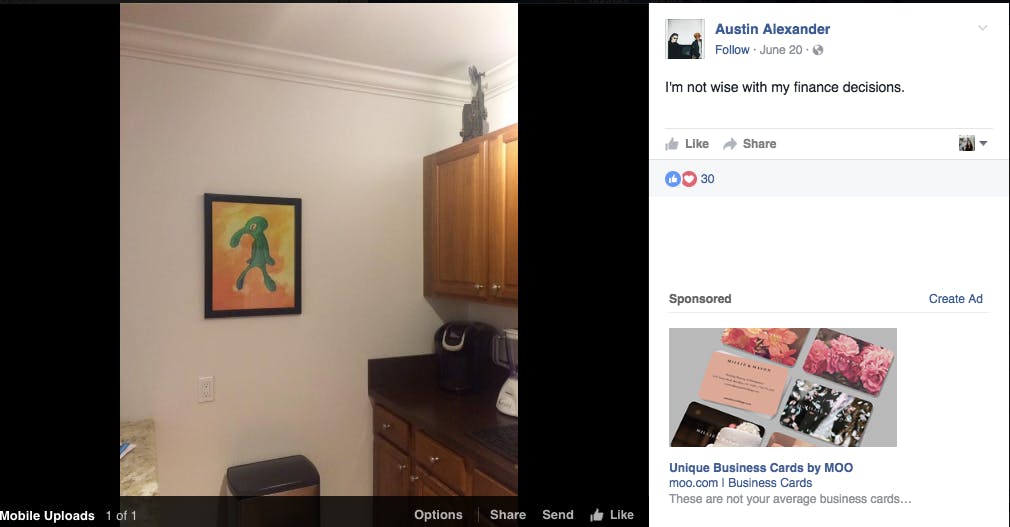 Alexander isn’t annoyed, though. “I’m honestly pretty humble that I happen to be responsible for ‘that one pic’ on the greater spectrum of this wonderful meme culture we all love,” he said. The photo recently gained traction when he posted it as a comment in a thread by Bardock Obama, a popular meme page.

“Unfortunately, the real story doesn’t involve unaware moms (my mom did see it, and said it was a ‘cool abstract painting of a rabbit’),” Alexander said.

Regardless of the artwork’s authenticity, Daniel’s tweet has already been liked over 60,000 times and retweeted almost 30,000, meaning that while the painting itself might not be worth much, the tweet it inspired is at least worth a week or so of viral fame.

u made me famous pic.twitter.com/Qw2Nx36hxI

Editor’s Note: This story has been updated to include Alexander’s claims.