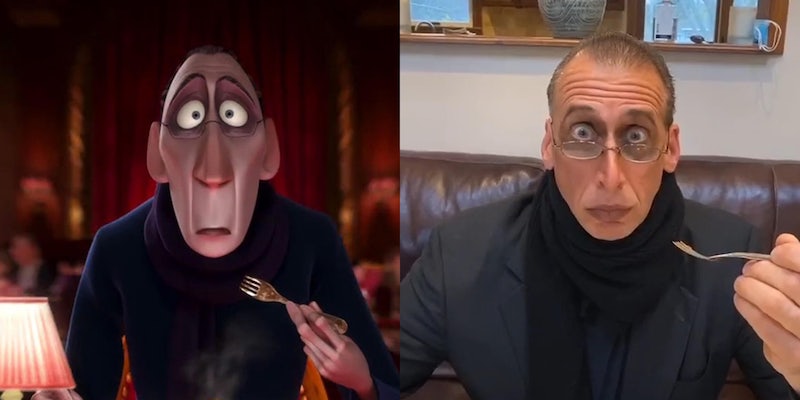 Few scenes in Pixar history have the same emotional resonance as Ratatouille’s Anton Ego taking his first bite of the movie’s titular French dish. The curmudgeonly food critic’s first taste whisks him back to his childhood home, where his mother used to prepare the same meal. A rapturous smile breaks out across Ego’s face, and he scarfs down the rest of the ratatouille.

Ego’s first bite of ratatouille is a climactic, humanizing moment from one of Pixar’s most meme-able films, so it was only a matter of time before somebody remade it. That’s where TikToker Joe Mele (@mmmjoemele) comes in. After it came to Mele’s attention that his father bore a striking resemblance to Ego, he decided to make the most of his free time under quarantine by transforming his dad into the animated villain.

Mele’s dad puts up an admirable fight and protests in vain that he doesn’t look like Ego, but he eventually decides to play ball. Mele decks his father out in a gray suit and black scarf, slicks his hair back, applies makeup, and adds Ego’s signature wire frame glasses. The results are uncanny.

Mele’s transformation video has earned an astonishing 11.2 million likes. Unlike Pixar, Mele felt the overwhelmingly positive reaction warranted a sequel. This time, his dad recreated the iconic tasting scene, but under one condition: Mele had to play the part of bumbling chef-in-training Alfredo Linguini.

Together, the father-son duo expertly brings the scene to life, down to the pen drop and the delectable-looking dish. The second video has accumulated 4.5 million likes on TikTok—not quite in the realm of the original, but a great performance for a sequel nonetheless.

Watch the original Ratatouille tasting below to see how Mele’s TikTok videos stack up.