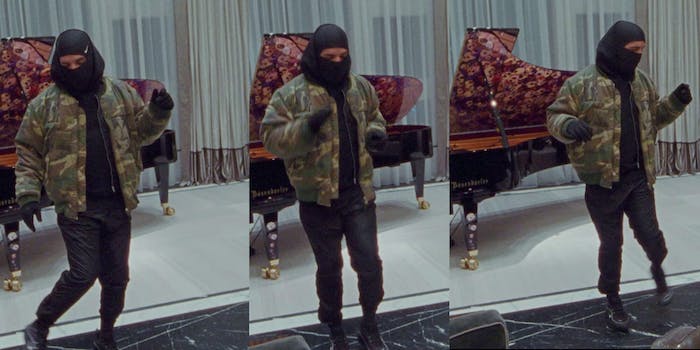 TikTok videos are coming up left and right.

Drake gave fans a look into his gigantic house in Toronto, Canada, in the video for his new song “Toosie Slide.”

The song was released on Friday and already has its own TikTok dance. In the music video, Drake does the dance during the chorus of the song.

As soon as the video dropped, Twitter and TikTok users poked fun at the Toronto native’s house and dance moves with memes.

One TikTok user reminded the internet of the days of the “In My Feelings” challenge when people were jumping out of their cars and dancing to the Drake song. The user, @kidthewiz, put a “Toosie Slide” twist on the original car dance.

“Toosie Slide” sounds like it was made with TikTok in mind—and it dominated the app before it was even released.

The creators of the dance, Toosie, Hiii Key, Ayo, and Teo, told Rolling Stone that Drake recruited them to design moves for the song. He sent them the hook and the verse, and the team got a dance together.

Complex reports that rapper Lil Baby was supposed to be featured on the song but never sent his verse back. He wrote on Instagram “@champagnepapi Sent Me This Song A Month Ago My Dumb Ass Ain’t Send The Verse Bacc !!”