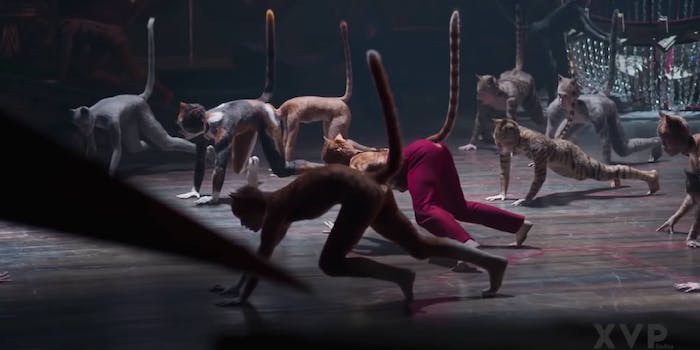 ‘Cats: The Butthole Cut’ has been brought to life with a fan-made video

Here's what it would have looked like if animators left the cats' buttholes intact.

The world could probably use a good parody that doesn’t hold back, and the internet sure delivered with the release of the parody, CATS: The Butthole Cut.

In March, Twitter users rallied around the hashtag #ReleaseTheButtholeCut, where fans of the universally-panned 2019 movie Cats demanded the release of the version where CGI cat buttholes remained intact.

Well, fans can now thank the team behind XVP Comedy for whipping up something sure to satisfy anticipation.

“We saw the hashtag #ReleaseTheButtholeCut online and realized that we actually had the capability to make this thing a reality. We’ve got incredible visual effects artists at XVP Studios and we love giving them a challenge,” XVP Comedy told the Daily Dot in an email statement.

With many people now staying home to help slow the spread of COVID-19, the video came at the perfect time and brought much-needed laughs and welcome surprise.

The video, which is just over two-minutes, utilizes the movie trailer as its basis, complete with various edits of the CGI felines showcasing their backsides and buttholes in all their glory.

“We hope that when people watch the Cats movie in the future… they can’t help but imagine the characters with buttholes. Then our mission would be complete,” VPX Comedy said.

Real-life quotes—and some fake ones—appear throughout the video of stars and filmmakers commenting on the film’s released “cut.”

So far, the video has over 200,000 views and over 2,000 likes. Prior to the parody’s release, celebrities such as Seth Rogen tweeted for the butthole cut release.

The video did end with a relevant call to action, urging viewers to “donate right meow” to the CDC Foundation at give4cdcf.org to help with COVID-19 relief.