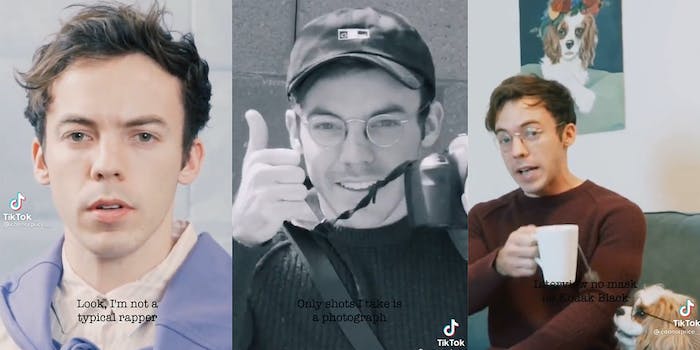 ‘I am BEGGING all white rappers to stop thinking this is a good idea’: TikToker gets called out for anti-Black criticism of hip-hop

'I simply don't know why you'd pursue a rap career if you have this massive contempt for the culture.'

Canadian actor and rapper Connor Price posted a TikTok video in March of himself rapping a song criticizing “typical” rappers and got blasted on Twitter for seemingly seeing himself superior to Black culture as a white rapper.

The video features Price rapping in a monotone voice about how he is not a “typical rapper,” because he “ain’t never sold no crack” and “ain’t never hold no gat.” Twitter user @mumagainstvapes kicked off the Twitter tirade by reposting the video on March 27, commenting: “I am BEGGING all white rappers to stop thinking this is a good idea.”

“Typical Rapper” dropped on streaming platforms back in 2020, but the TikTok video blew up on Twitter in 2021, with Twitter users critiquing Price’s apparent denigration of Black culture. The video has since been taken down from TikTok, but can be found on Spotify, YouTube, and other streaming platforms.

Price is a former child actor with roles in Cinderella Man (2005) and Good Luck Chuck (2007). He is noted for a collaboration with actor Idris Elba on his song “Courteney Cox.”

The most recent repost of the TikTok video has garnered over 537,000 views on Twitter, and this is the second time it’s surfaced on Twitter and been railed. Many see the lyrics as an anti-Black criticism of rap and hip-hop.

“I simply don’t know why you’d pursue a rap career if you have this massive contempt for the culture that created it. It’s boring and maybe kinda racist,” commented @mumagainstvapes.

“You come into a culture you don’t belong to, shit on the descendants of the creators of said culture, and equate mediocre whiteness as being not only ‘different’ but somehow ‘better,'” commented @keiajahhh on a repost that blew up and brought the video to Twitter’s attention yet again.

A few Twitter users sprang to Price’s defense, with @OddTaylor85 claiming that “His flow and lyrics aren’t bad, and that’s the problem. He’s literally more talented than the Kodaks, Uzis and Carti’s of the game but FUCK this is corny and I don’t know what he thinks he’s gonna accomplish in this field doing that.”

“But why does he need to tell me what he’s not doing tho. He’s just looking his nose down on those that do some of those things,” responded @Kreative_Kam.

The Daily Dot has reached out to a representative for Connor Price via email.