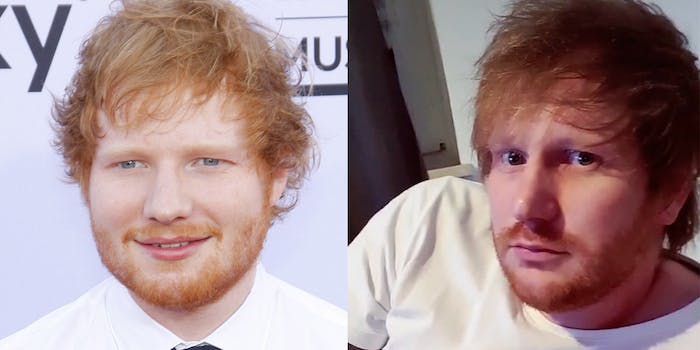 This TikToker’s boyfriend looks exactly like Ed Sheeran, and people are shook

This man's certainly got the shape of the 'Shape of You' singer.

Finding your celebrity doppelganger can be a flattering, humbling, or outright baffling experience, depending on which celebrity you end up looking like. The “I look like a celebrity check” challenge has exploded on TikTok as users reveal their famous lookalikes, and one woman recently went viral for showing the world that her boyfriend looks astoundingly like Ed Sheeran.

The woman, whose account is fittingly named @edsheerandouble, has dedicated her TikTok almost exclusively to showing how much her boyfriend looks like the “Shape of You” singer, posting dozens of videos highlighting the similarity. The account has more than 197,000 followers, and her old videos routinely earned tens of thousands of views. But when @edsheerandouble joined the “I look like a celebrity check” challenge, the ensuing video exploded with 16 million views, 3 million likes, and 32,000 comments.

It’s easy to see why @edsheerandouble has the internet shook. Upon first glance, it’s nearly impossible to tell the two apart. The thin, side-swept red hair, the medium-cropped beard, the distant, vaguely uneasy stare: They’re all there. The dude even dabbles on the guitar, as seen in a previous TikTok where he busks before unwitting pedestrians.

The general reactions on @edsheerandouble’s viral video are, unsurprisingly, shock and awe. “YOU CANT TELL ME THATS NOT ED SHEERAN!” one user wrote.

“He looks more like Ed Sheeran than Ed Sheeran,” another commented.

One user seemed to have cracked the code on why the man in the video looked so uncomfortable (besides the fact that his girlfriend showed off his celebrity likeness for the world to see): “He’s nervous because he’s actually Ed Sheeran and he’s just been exposed.”

If @edsheerandouble’s videos keep exploding at this rate, her “boyfriend” might end up becoming just as popular as the “”real Ed Sheeran”” soon.