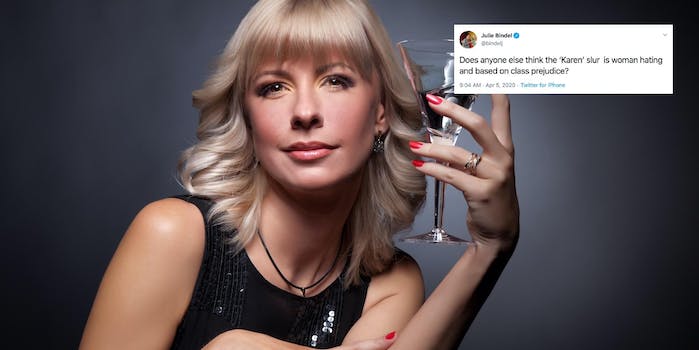 Over the weekend, renowned anti-trans activist Julie Bindel had a thought she decided to share with the internet. Karen, the archetypal racist, classist, and entitled white woman, is clearly, according to Ms. Bindel a “woman-hating” slur “based on class prejudice.”

Some had trouble believing that in the middle of a global crisis this is what Ms. Bindel and her TERF allies were getting het up about. But sadly, yes, the Karen discourse is real and it hasn’t stopped even after several days of it making its way around Twitter.

Karen’s across the internet were in fact quick to agree with Ms. Bindel. Writer Katrina Gulliver felt the need to bring back an old tweet in which she’d claimed that Karen was actually about policing women for asserting their rights in a consumer setting.

However, Karen has never been about that. As screenwriter Camilla Blackett explained so succinctly, “Karen is a catchall for entitled middle-class CIS white women who weaponize their status against the working class and minorities.”. Karen isn’t valiantly asserting her consumer rights, Karen is trying to get someone fired for not accepting an expired coupon—and she absolutely is not oppressed for doing so.

Its an act of incredible Karenness that people are still attempting to argue that Karen is a slur after several days of this, but at least it’s brought us all some great Twitter humor to lighten up another Monday in lockdown.