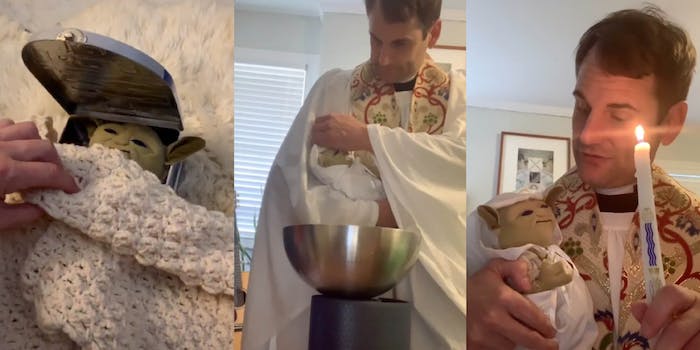 There’s an abundance of strange but thoroughly excellent content on TikTok, and the latest to arise is a video of a priest performing a baptism. It might not seem strange until you consider that the priest was baptizing… a “Baby Yoda” doll?

The video is pure, simple, and aggressively 2019. Everyone’s been cooing over Baby Yoda since The Mandalorian first unveiled the precious little ball of green, and the past few weeks have been chock-full of Baby Yoda themed videos, memes, and conversations. It’s no wonder, then, that the priest chose such the character for his charming TikTok.

It’s not the first foray into virality for Episcopal priest David W. Peters. In fact, Peters has enjoyed TikTok fame at least once before. His “Hot Priest Summer” video, in which Peters dons a number of traditional religious robes to La La Land‘s “Another Day of Sun,” put him on the map in August. He’s since turned his minor internet fame into a solid TikTok following.

The idea for the latest video appeared to begin with the toy itself. Peters uploaded a video of a child holding the Baby Yoda doll and wrote, “The Candidate for Holy Baptism will now be presented.” In the background, the Cantina song from Star Wars: A New Hope is playing in the background. In the baptism video, Peters opted for the classic Star Wars theme.

In the baptism video, which has accrued nearly 9,000 likes so far, Peters unveils the Baby Yoda from its concealment. Then he takes the doll into one arm, scoops holy water from a silver bowl onto baby Yoda’s head, and produces a candle to finish the ceremony. He cinches the whole thing with an inaudible “amen.”

Update 12:56pm CT, Nov. 28: In a Twitter message to the Daily Dot, David W. Peters revealed the Yoda doll he baptized was actually an “Old Yoda” with “a haircut and dark eyes.” He also said that it’s common for seminary students to practice baptisms with dolls.

“This wasn’t a ‘real baptism’ just a bit of theater!” Peters said. “Baby yoda was wearing my son’s baptismal gown and that was my son’s candle for his baptism four years ago.”

Peters told the Daily Dot he was inspired to make the TikTok because he’s a “big Star Wars fan” and a “big baptism fan.”

“I do these things on Tiktok to connect the timeless truths of our faith with the next generation,” Peters said. “Social media is the new town square, and I think that’s a place the Church should be.”