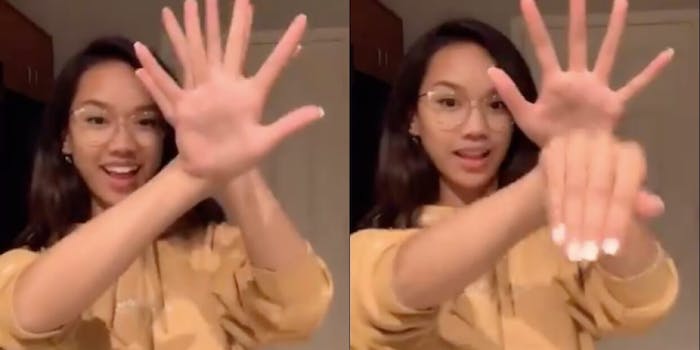 Another week, another TikTok challenge. This latest trend will bring out your inner magician.

Tori Pareno, a Los Angeles-based content creator, posted a TikTok video that creates an optical illusion to appear as if her hands are magically passing through one another.

“Here’s something trippy for your night lol,” the 19-year-old wrote to Twitter on Thursday with the TikTok video.

here’s something trippy for your night lol pic.twitter.com/lkcX25mgri

In the eight-second video, Pareno quickly moves her fingers to the beat of a dubstep song. At the end of the video, her face explodes with excitement at her accomplishment.

In the four days since she posted the video, it has reached more than 8.7 million views and has been shared more than 174,000 times.

After her video went viral, others tried to do the same “trippy” hand challenge.

This guy took it to the next level and created the hand illusion wearing LED gloves.

However, it wasn’t as easy as Pareno made it look.

Some people jokingly called the trick “witchcraft” or “sorcery.”

What in the witchcraft sorcery tarnation is going on here? pic.twitter.com/50aFe6ADwH

Pareno tweeted that it was “creepy but cool” that people had viewed her hands “half a million”– now millions– of times. She has dubbed herself “the hand lady.”