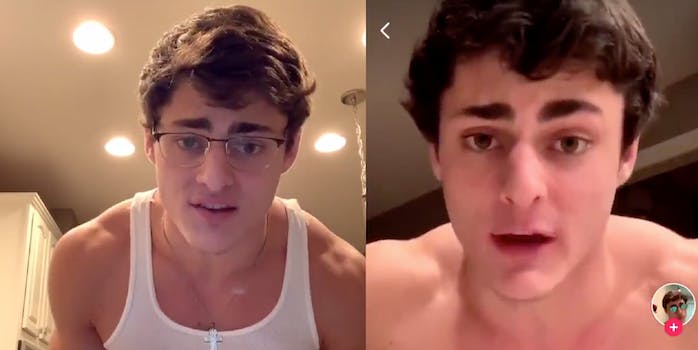 'Should’ve just made his pasta and left.'

A new user is making waves on TikTok.

TikTokker itsqcp‘s New Jersey persona recently elevated him to overnight fame. Videos of itsqcp aggressively preparing pasta have been making the rounds online, and have seen his follower count grow dramatically. His newfound popularity is at risk, however, after people online unearthed racist videos from the young TikTokker.

It all started with the first episode of The Angry New Jersey Cooking Show. Itsqcp, a North Carolina native, uploaded a simple video of himself, adorned in a white tank and apron, forcefully explaining how to prepare spaghetti and meatballs. After the video, which has nearly 520,000 likes on TikTok, blew up, itsqpc decided to make it an ongoing series.

The next several entries in The Angry New Jersey Cooking Show followed a similar format. Itsqpc taught his viewers how to prepare fettuccine alfredo, rigatoni alla buttera, and cavatelli over the next several episodes of his series, each with increasing levels of aggression. The videos, in their amusing format, quickly took TikTok by storm. In all, the four episodes racked up nearly 4.5 million likes.

It wasn’t until after itsqcp reached viral status that his older, problematic videos came to light. All things on the internet are immortal, after all, and users quickly began spreading word of racist uploads from the newly minted TikTok star. “So apparently the pasta guy from tiktok is racist,” one user wrote. “Yikes.”

A video of itsqcp performing “impressions” started making the rounds, to the dismay of his fans. In the video, itsqcp—notably without a New Jersey accent—impersonates an “angry ghetto girl” and a “ghetto Black man.” As the video spread online, people were quick to jump on his problematic portrayals.

“Whelp, he had a good literal 15 minutes,” one user wrote.

welp, he had a good literal 15 minutes.

Another exclaimed that he “should’ve just made his pasta and left.”

In response to the criticism his earlier videos prompted, itsqcp hit back at his naysayers.

“I’m racist for doing an impression,” he wrote in a since-deleted tweet. “Lol my bad you got me.”

People were not behind itsqcp’s explanation and urged him to apologize. Unfortunately, his initial half-hearted sentiments didn’t sit well with everyone. “My apologies to who ever is offended,” he wrote. “No bad intentions.”

he posted this an hour ago he not sorry lmaooo pic.twitter.com/ynVk9wVESj

The problematic videos didn’t end at one, unfortunately. The longer users searched, the more videos came to light. One user highlighted another upload. This time, itsqcp referred to an Asian woman as “the woman from your nail salon.”

After the video of his impersonations went viral, itsqpc uploaded a new video on Jan. 5, apologizing.

“The impersonations were really exaggerated and honestly offensive,” he said in the video. “I clearly wasn’t thinking that anyone would be offended, and I completely understand why. It was too extreme. Stereotyping is definitely very popular in the comedy world, but it can obviously be taken very offensively and very personal. I’m not racist at all. I don’t know why that one video has to define me like that.”

Commenters were split on the apology video. While some people were happy to accept the apology and move on, others felt that it wasn’t enough. “People wanna defend him and people who are not black wanna say ‘its not offensive’ but ignore this disrespect,” one commenter wrote.

had the nerve to say he wasnt thinking ab what he was doing but had the idea to make a tiktok full of stereotypical impersonations. the GALL this boy has

Itsqcp told the Daily Dot in an interview that over the course of more than 500 TikTok uploads, he never had an issue. After the cooking video went viral, his follower count jumped from around 620,000 to more than 1.2 million. “It wasn’t necessarily the key to success,” he said. “But a quick boost for sure.”

“I posted a video doing impersonations of a few different nationalities and races, but it was perceived different than I intended, leaving people offended, which I understand,” he continued. “I had no bad intention and now learned of my mistake, which is to not use stereotypes like those for comedic use.”

He noted that many people have been supportive of his apology, but certainly, not everyone has accepted his explanation.

“Nothing I can do but hope they accept that it was a mistake, and I learned from it. I’m so far from racist, and that’s why I wasn’t even thinking when I posted it,” he said.