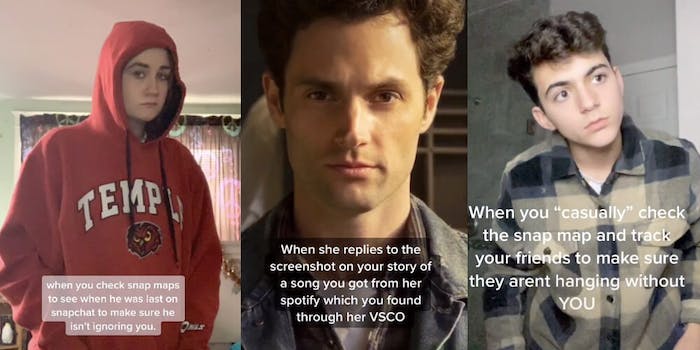 'You' is inspiring a generation.

Netflix’s stalker drama You has inspired endless social media reactions since it first migrated to the streaming service in late 2018. Previously, we saw women pleading with the show’s star, Penn Badgley, to stalk them. Now, with the release of season two, we’ve got a new TikTok POV meme inspired by the show.

This new meme features a voice-over from the show (“I just need to know who you really are,” implores Badgley’s murderous stalker character, Joe Goldberg) over a You-inspired slideshow of different photos, often accompanied by text explaining these teens’ own forays into light stalking.

But others do get a little bit more…intense.

And some took it to a whole other level, because this is the internet, and it’s what we do.

And at least one user pointed out that it’s Dan Humphrey from Gossip Girl who would ultimately have the most on-point You-inspired TikTok meme if we’re being honest.

But social media is so often about making sure people don’t feel isolated and alone, and it’s great that You has given teens on TikTok a character they can not only relate to, but be inspired by.

Just kidding, burn it all to the ground!!!