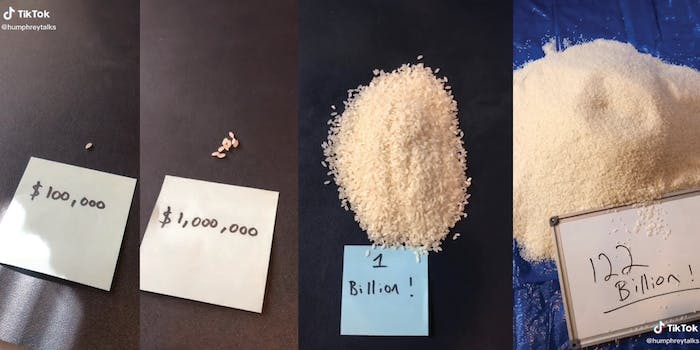 Fifty-eight pounds of rice, when all was said and done!

Amazon CEO Jeff Bezos recently made headlines after purchasing literally the most expensive home in Los Angeles—a $165 million Beverly Hills mansion which was the former estate of acclaimed Golden Hollywood-era film executive Jack Warner. But perhaps the most striking thing about the news is that the home only set Bezos back .13% of his near $130 billion net worth. That much money can be hard for most of us to comprehend. So this week, Humphrey Yang, a 32-year-old e-commerce consultant and Silicon Valley entrepreneur, demonstrated just how much, simply by counting grains of rice on his TikTok account.

Previously, Yang went viral for demonstrating the difference between $1 million and $1 billion by counting out 10,000 grains of rice. First, he estimated that if a single grain of rice was worth $100,000, then ten grains of rice would amount to $1,000,000, and so on.

This TikTok has a really good visual representation of a million versus a billion dollars, which is especially relevant now that people are trying to compare Bernie’s $2.5 million to Bloomberg’s $64 billion pic.twitter.com/oX8GUpe2Iq

As much of an undertaking that first endeavor was—about two hours, when all was said and done, which Yang documented on YouTube—in “Rice. Part Two,” he set out to conceive what Bezos-level wealth looks like in terms of grains.

To do so, Yang purchased a digital food scale at Target to weigh out the $1 billion pile of rice. He then went about the arduous task of calculating how much rice he needed to represent roughly $130 billion in rice.

From there, he headed to Costco—because where else can someone buy Bezos amount of rice?

In the end, Yang required 58 pounds of rice to complete his experiment, which he conducted using a blue tarp on the floor of his home. Lest anyone think the undertaking was wasteful, he also sure to note that he had several families lined up to take the unused rice.

These teens on TikTok are out here doing the lord’s work. pic.twitter.com/KzGKGqR0w2

Many of us struggle to understand the sheer scale of wealth inequality. Watch @Humphreytalks visually demonstrate the net worth of #Amazon’s Jeff Bezos with rice. #Inequality
pic.twitter.com/zsvbxpJrE2

For science, Yang even made sure to denote a small pile of rice that would be worth the equivalent of Bezos’ new home, compared to the rest of his vast fortune.

When you look at it that way, it seems as though Bezos can afford to shell out a little more than $10 billion to combat climate change? Or even treat his warehouse employees a little better? If not, it looks like we might have Humphrey Yang to keep holding him accountable.