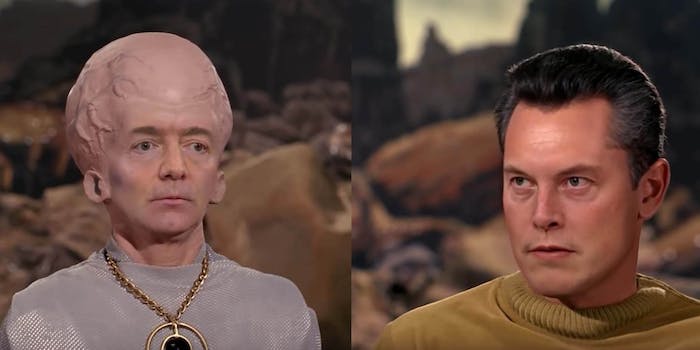 The Amazon founder takes the form of a Talosian, while the Tesla CEO portrays Christopher Pike.

Jeff Bezos and Elon Musk have gone head-to-head in a new deepfake centered in the world of Star Trek.

The video, uploaded to YouTube by deepfake creator The Fakening this week, has already been watched more than 320,000 times.

In the clip, taken from the original Star Trek pilot, the Amazon CEO takes the form of one of the Talosians, a sentient humanoid native to the planet Talos IV.

The face of the Tesla and SpaceX CEO, on the other hand, can be seen on the body of Enterprise captain Christopher Pike.

In a copy of the video posted to his Twitter page, The Fakening states that Musk “in the not too distant future” will save humanity “from the captivity” of Bezos’ Amazon illusion.

While the video’s commentary may be more appealing to fans of the sci-fi franchise, the deepfake itself perfectly showcases how far the technology has come.

The idea for the clip appears to have originated, at least in part, from South Park. The Comedy Central show famously depicted Bezos as a large-brained Talosian in a December 2018 episode that took aim at Amazon.

The deepfake is not the first from The Fakening to include the Tesla CEO. In May of last year, Musk was terrifying transformed not only into a giggling baby but also into Hollywood actor Charlie Sheen.

Other prominent deepfake creators have similarly turned Musk into everyone, from Tony Stark to Dr. Evil.